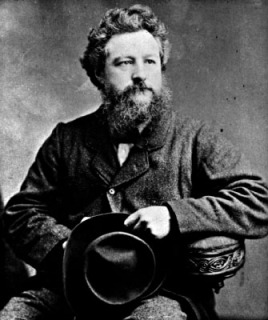 On this anniversary of the Arts and Crafts Movement, craft has been given a boost by the UK government. Last October, John Hayes, the Minister for Further Education, Skills and Lifelong Learning gave a talk to the Royal Society of Arts on “Skills and their Place in Modern Britain” saying that ours must be the age of the craftsman. Parts of his speech could have been written by William Morris (left).

“In most of Britain,” he said, “the hard-won skills of individuals have been subsumed by brutal, impersonal ubiquity. Butchers, bakers and others reduced to anonymous shop assistants in soulless megastores.” John Hayes praised the humanising influence of the crafts and said he wanted to raise the status of hands-on education in schools and colleges. Craft skills are essential to manufacturing industry, he said, and the government will continue to promote apprenticeships. It’s encouraging to hear this, but the way the government is going about it will not help ceramists.

Training for the crafts is the responsibility of a government agency called the Creative and Cultural Industries Skills Council In 2009, in partnership with the Crafts Council, CCS produced the Craft Blueprint, the workforce development plan for crafts in the UK. It recommended the creation of a national system of craft apprenticeships. Any programme of craft apprenticeships obviously has to meet the needs of makers and those who want to become makers. The best way to ensure that it does is to consult craftspeople and to build on what has been proved to work already.

Ceramists are a significant part of the crafts environment, accounting for a third of craftspeople, so it’s essential to talk to them. But the Craft Potters Association were never consulted about the Craft Blueprint.When I talked to CCS, I wasn’t sure if they’d heard of the CPA, although they say they would be happy to enter into dialogue. The Crafts Council did consult ceramists, but it’s not clear how far the views of consultees were taken into account. One experienced potter who was consulted never heard anything about the Blueprint again.

Many craftspeople are adults seeking a second career. For two-thirds of those working in studio crafts, art school was their route into making. The purpose of an apprenticeship is to give graduates the workshop experience they need to practice professionally. That’s what Lisa Hammond set up Adopt a Potter Funded by voluntary contributions, and working on a shoestring, Adopt-a-Potter builds on Lisa Hammond’s successful experience of training potters to run their own studios. It provides workshop experience for ceramics graduates and subsidises employers who would otherwise find it difficult to take on an apprentice. It works well. Why not model national craft apprenticeships on that?

Unfortunately, it’s not going to happen.

The focus of craft apprenticeships will be school leavers without qualifications, who are the government’s priority for vocational training. The apprenticeships will offer a non-graduate entry route into the crafts and graduates will not be eligible. Apprentices will be trained to NVQ level 2 or 3 (equivalent to GCSE or A-level). There’s a clue in John Hayes’s statement that craft skills are essential to manufacturing industry. The craft apprentice scheme may meet the needs of industry and some heritage crafts, but not the needs of studio crafts. CCS are essentially considering training for employment, not for running a studio.

It might be argued that existing routes into ceramics are too exclusive and that they should be opened up to people with lower qualifications. There may indeed be scope for training school leavers. The Leach pottery in St Ives is exploring this with Plymouth College of Art, and some other potteries are also willing to train young people. But training school leavers to the level of skill needed for independent professional practice takes far longer than the sort of apprenticeships being developed by CCS.

The dominant pattern of work in the crafts is independent self-employment and there are few opportunities for people who want to be employed as assistants. Only five per cent of craft businesses cent employ full time staff. The proposed scheme of craft apprenticeships will not offer financial assistance to employers. Similar apprenticeships in the cultural industries have so far been offered by institutions with public funding. Makers are not in that position: three quarters have a turnover of less than £30,000. Without subsidy, they are unlikely to take on trainees.