My old friend Nick Rowling, who corrected the mistakes I’d made about the alleged iconoclasm of the English Commonwealth, suggest I read Ernst Gombrich’s Art and Illusion, which he thought was one of the best books on the history of art. I saw that his view was shared by Kenneth Clark, who described it as “One of the most brilliant books of art criticism I have ever read.”

It’s also one of the hardest. Gombrich studied at Vienna, where art historians were steeped in philosophy that they often took for granted, and without a knowledge of which it’s difficult to understand what they’re saying. Although Gombrich lived most of his life in England, and although he wrote Art and Illusion in English, he thought it in German. His idea of the way that mental structures or “schemata” shape perception comes from Kant, and the “mythological explanations” of history that he deprecates (explanation in terms of collectives like “mankind”, “races” and “ages”) come from Hegel. Most of his antecedents are German: Konrad Fiedler, Adolf von Hildebrand, Heinrich Wölfflin, Alois Riegl, Franz Wickhoff, Hans Sedlmayr, Emanuel Loewy, Julius von Schlosser, Aby Warburg, Rudolf Arnheim, Ernst Kris and Karl Popper.

I went online to look for cribs but found that some of them understood even less than me – saying, for example, that the idea of “schemata” was invented by Gombrich, or attributing to Gombrich an opinion of Herbert Read’s that Gombrich dismisses. But that’s how difficult the book is. 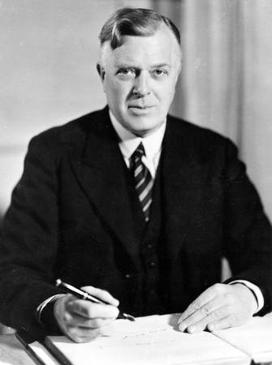 I’m reading Michael T. Saler’s The Avant-Garde in Interwar England, about the English version of modernism that carried forward the social ideals of the Arts and Crafts Movement. The book focuses on Frank Pick (above), the boss of London Underground, who commissioned the modernist stations of the Piccadilly, Northern and Metropolitan Lines and the posters that advertised the underground.

Pick played a leading role in the Design and Industries Association (DIA) and the Council for Art and Industry (CAI) putting him at the centre of design reform.

The CAI , which stood in a line that linked the Chamber of Horrors in the South Kensington Museum to the Design Council, was central to the art and industry debate of the 1930s, which sought to raise the standard of consumer products, ostensibly because better design would improve sales and exports. What I’ve never been able to understand about this movement is that it saw the need to raise the sights of industrialists and to improve the taste of consumers. But why, if poor design was a brake on sales, was it necessary to improve consumer taste?

Saler makes it clear that the idea of fitness for purpose that drove the modernism of the DIA, the CAI and Pick’s underground was more than the physical usefulness of objects and entailed moral ans spiritual fitness as well. As Pick put it, “Fitness for purpose must transcend the merely practical and serve a moral and spiritual order as well. There is moral and spiritual fitness to be satisfied. We know it sure enough when we see it.” Good design was not a matter of taste, understood as consumer preference, but objective standards with moral and spiritual significance. The ideas of good design that ran from the 1850s to the 1960s are hard to understand from our viewpoint, in which we see no aesthetic absolutes and see one design is as good as another. Design was associated with planning and and state direction and was not to be left to the vagaries of the market and personal preference. 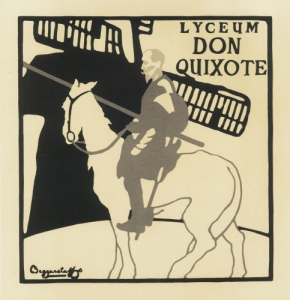 To reinforce the point about the similarity of Kós’s graphic style to the Beggarstaffs (James Pryde and William Nicholson), here (above) is one of their best designs, a highly original theatre poster for A Chapter from Don Quixote by W. G. Wills, performed at the Lyceum Theatre in 1895 and starring Henry Irving. Irving didn’t like and it wasn’t used but it was often reproduced, so it has become familiar. The common elements of asymmetry, strong outline, flat colour and empty space are even more evident in Nicholson’s Queen Victoria print (below). (The originals of both designs are in the V&A.)

There is the same in Lautrec’s posters (above) and Gauguin’s painting, but the immediate source for ­Kós must have been the graphics of the Secession (below). The ultimate source, of course, was Japonisme, and in particular Japanese woodblock prints. So Kós’s renderings of his country’s rural folk art also had metropolitan and international sources.