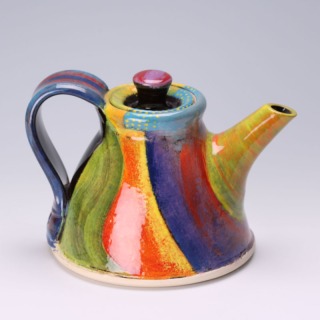 I met John Pollex at the opening of his exhibition of slipware at the Contemporary Ceramics Centre a couple of weeks ago. There is till time to see his show before it closes on 21 April. Contemporary Ceramics opened its airy exhibition space opposite the British Museum last year and Pollex’s brightly coloured pots have been displayed there to good effect.

Pollex began making slipware thirty years ago, starting with traditional work in white, brown and black. At the pre-exhibition talk he showed slides of jugs he did in the style of the old Devon harvest jugs. On one he had written “Pollex me fecit”, “Pollex made me” in Latin, which is a nice joke because “pollex” is Latin for thumb.

After working in this way for a few years, he saw an exhibition of work by Howard Hodgkin and had a sort of Damascene conversion. He is one of the few slipware potters to use brilliant colour. Mary Wandrausch, the doyenne of slipware potters, who is familiar with the entire European tradition, has added blues and yellows. But Pollex makes brilliant and dazzling works without any reference to tradition. The only other slipware potter I know who works like this is Barry Stedman, some of whose work is also on display at Contemporary Ceramics.