Mackintosh’s innovative architecture and his link to continental design and modernism made me consider again why the English Arts and Crafts movement, after revolutionising design in the late 19th century, ran into a dead end in the 20th.

The movement created several initiatives that had more to do with social change than design, such as The Home Arts and Industries Association, Haselmere Peasant Arts Industries and the Clarion Guild of Handicraft. They tended to be backward-looking, utopian and to encourage the participation of the poor in the crafts, but they did not contribute to product design or the manufacture of of well-made goods at a reasonable price and they fostered amateurism. Lewis F. Day told a government inquiry into the Royal College of Art that, in his opinion, W. R. Lethaby, the professor of design, paid too little attention to the requirements of industry and that the Arts and Crafts Movement had drawn the College towards “the more or less amateurish pursuit of the Handicrafts.” After William Morris’s death, the Arts and Crafts Exhibition Society, the principal arts and crafts body, lost its way and repeated what it had done before, and by the First World War its leaders were elderly. Roger Fry said they “represented to perfection the hideous muddle headed sentimentality of the English – wanting to mix moral feeling in with everything.” I think it’s that mixing in of moral feeling that was the reason it was overtaken by design in in Europe and America.

Although the Bauhaus was at first inspired by arts and crafts ideals, it gradually abandoned them and turned to industrial design. Lethaby, whom Day may have judged too harshly, co-founded the Design and Industries Association with others who were concerned that the growth of the arts and crafts had “been arrested for the last ten years in the country of its birth.” They believed that “The principles of the movement are now more consistently and logically studied in Germany and America”.

Mackintosh also absorbed arts and crafts ideas and went beyond them. The Hill House, for example, (top) has Scottish vernacular features and uses local materials, and some of the decoration was executed by Mackintosh and his wife Margaret Macdonald Mackintosh. But he never thought that every designer should execute his own designs, that everything should be made by hand or that art was a moral crusade, and however much The Hill House resonates with Scottish precedent, its form is radical and anticipates modernism in its bold, abstract shapes.

When we were in Glasgow last week, the scaffolding on the art school obscured most of the Mackintosh building but indicated that it would soon be re-opened, improved beyond its condition when fire struck in 2014. Now comes the shocking news that another fire has damaged the building, undoing most of the painstaking restoration of the last three years.

The cause of the fire in not known yet. The 2014 fire was caused by gases from a canister used in a student project. (The Harrow art school fire at the University of Westminster in 2007 was also said to be caused by the ignition of materials used in a student project.) Will there be funds for another restoration?  I hope so: the Mackintosh building is Grade A listed and an important part of Scottish heritage.

Glasgow was one of the first British government art schools to teach pottery. In 1893 the school opened its Technical Art Studios, teaching stained glass, needlework, bookbinding, painting on china, and metalwork. The chairman of governors was James Fleming, a pottery manufaturer.

I contrasted the plain walls and restrained patterning in Mackintosh’s houses with the busy Arts and Crafts style, by which I really meant the style of Morris & Co., which many middle class homes had adopted by 1900. But Mackintosh, of course, shared many design ideas with the Arts and Crafts movement, including attitudes to ornamentation. When I looked at the Society of Designer Craftsmen’s website, I found that Mackintosh was a member (when it was the Arts and Crafts Exhibition Society).

Alan Crawford’s biography relates an account of the Society deriding Mackintosh’s exhibits in 1896, but says that it’s hard to find evidence, and notes that he exhibited again in 1899 and 1916.

Glasgow is celebrating the 150th anniversary of the birth of Charles Rennie Mackintosh and we went to see the Hunterian Gallery’s reconstruction of the house he designed for himself at Southpark Avenue, the exhibition at the Kelvingrove Museum about the Glasgow Style, and The Hill House, his most important domestic project, made for the publisher William Blackie.

All the photos here were taken at Hill House, except the last, taken at Glasgow Art School.

Mackintosh lived at Southpark Avenue in the later years of his partnership with Honeyman and Keppie and just as he began to practice on his own, so the house was his business card. He and his wife remodelled it, added doors and windows and commissioned furniture, fittings and textiles. It was designed to be airy and open, they used pattern sparingly and most of the rooms have white walls. A rare innovation was fitted carpets, made from stitching together narrow-loom runners. The effect is forward-looking and modern and strikingly different from the busy Arts and Crafts style popular in England at the time. 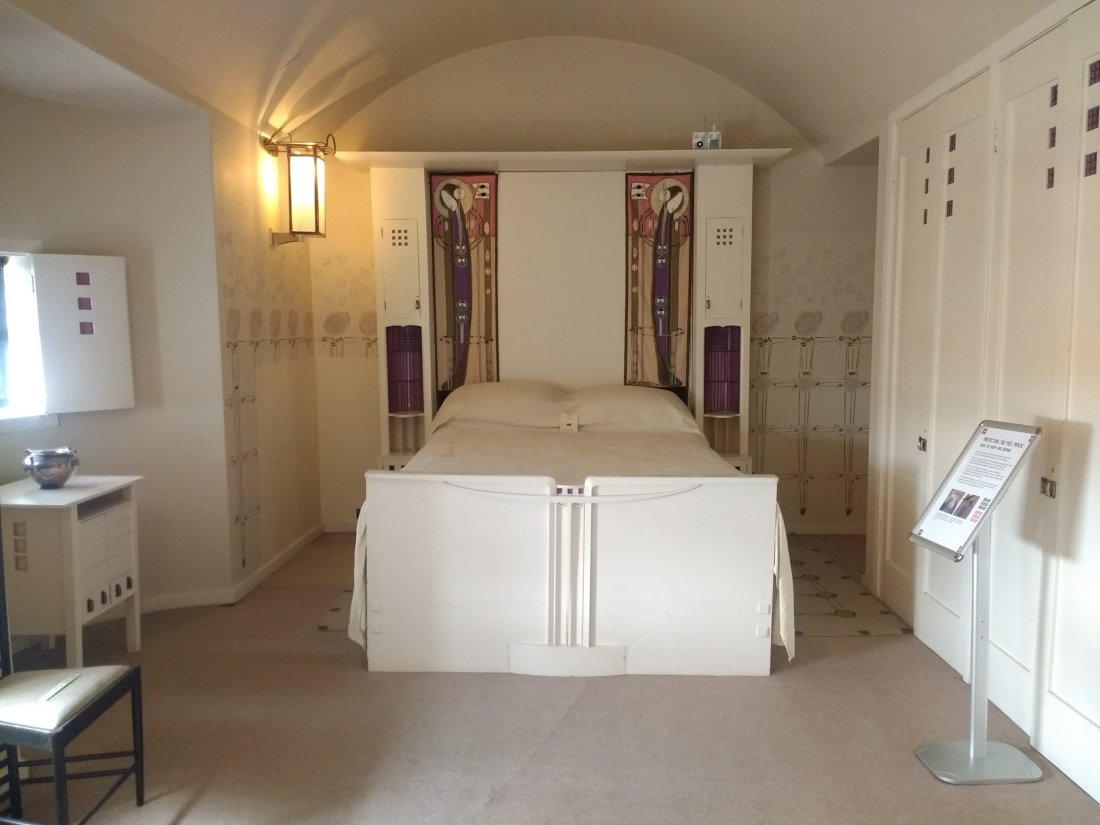 Mackintosh’s inspirations are partly Japanese and partly Celtic but he made something new out of them, designing houses with light, clever management of space and controlled use of colour. (He objected to Mrs Blackie putting yellow flowers in Hill House.)

His buildings are so iconic that it is surprising to find that Mackintosh was not successful in Glagow and was more appreciated in Vienna, where he influenced the Secession and the Wiener Werkstätte. The Blackie family loved Hill House and lived there until the 1950s.

Mackintosh was meticulous and demanding and the Glasgow Art School was horribly late and over budget. 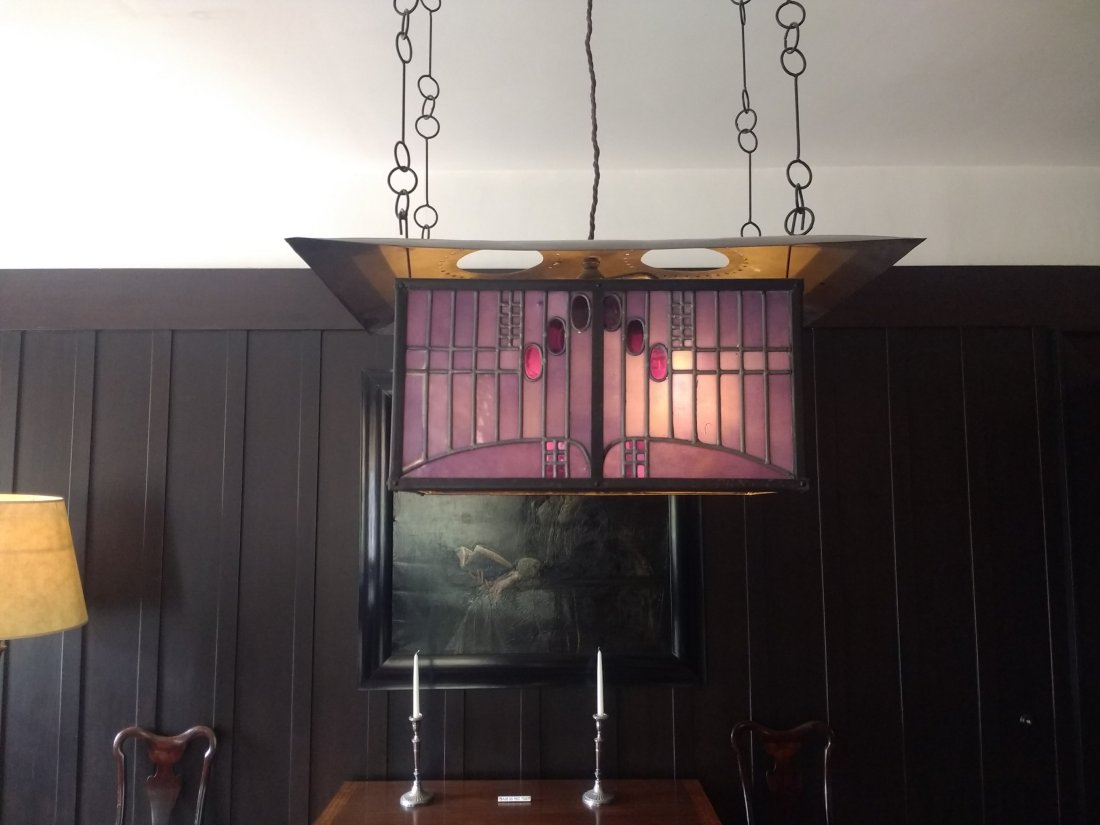 The Art School is still covered in scaffolding as it undergoes major repairs following the fire. 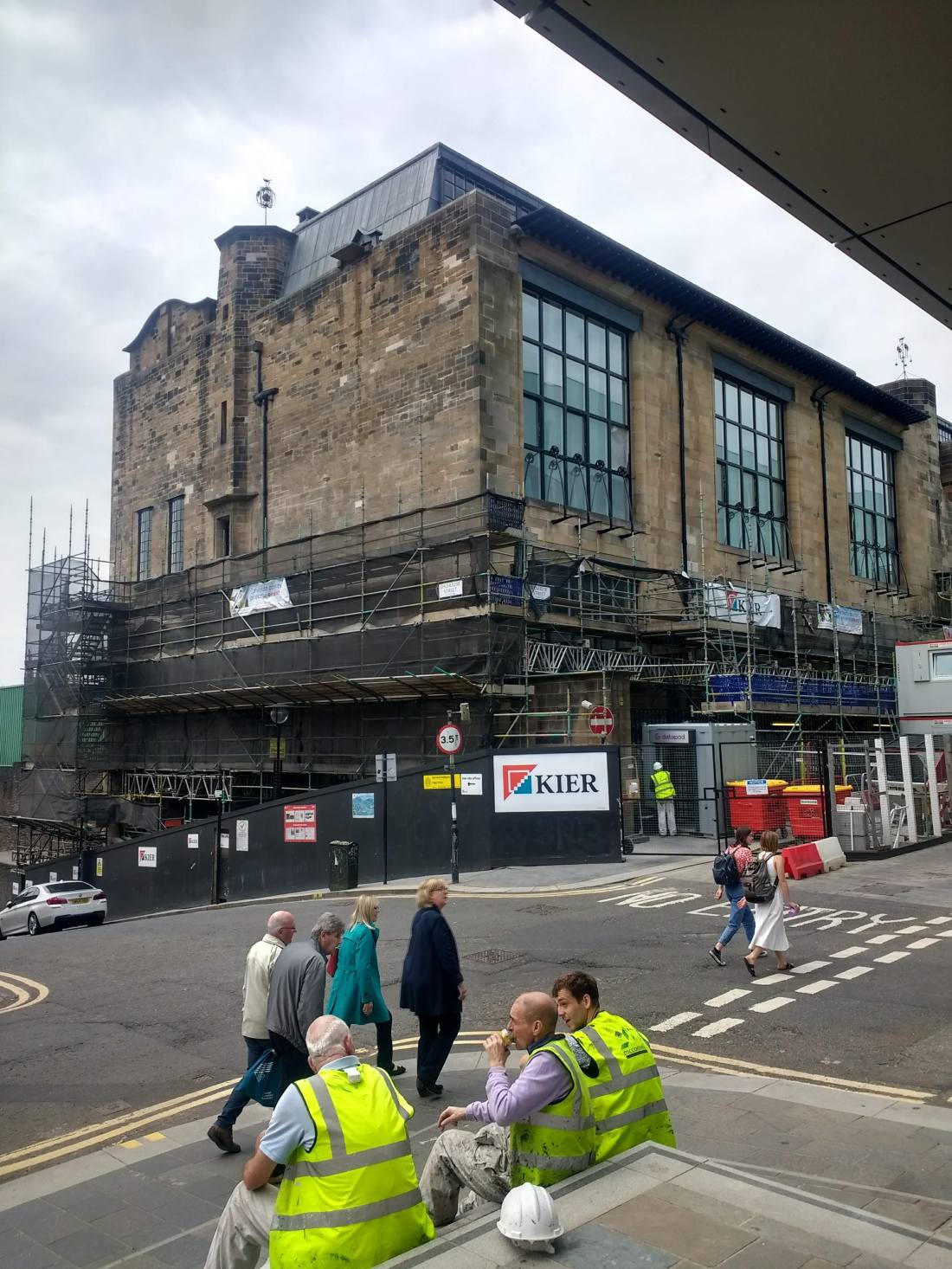