William de Morgan’s A Likely Story has long passages in which pictures talk.

The main subject, Reginald Aiken, ekes out a living as a painter by picture restoration. One of his jobs, a seicento portrait, talks to old Mr Pelly about its subject and her adventures in Italy. Mrs Euphemia Aiken later hears a photo of the portrait telling her that Reginald isn’t such a bad fellow after all.

These occult narratives are hedged about with scepticism and qualifications: were they dreams, or the voice of the unconscious, or perhaps just a sort of self-hypnotism? A young friend of Mr Pelly’s ponders on the meaning of his experiences.

“It was the action of his brain, my dear, not his own doing at all ! Let me see — what’s it called ? — something ending in ism.”

The Psychomorphic, a psychic investigation society, investigate Mrs Aiken’s narrative and sagely conclude that, “failing further evidence, we are justified in placing this story in section M 103, as a Pseudo-real Hyper-mnemonism.”

William and Evelyn de Morgan were both associated with Spiritualism. William’s mother Sophia was a medium his sister Mary claimed to communicate with the dead. Lois Drawmer has analysed the Spiritualist content of Evelyn’s paintings, which intensified as she got older (above).

Contemporary with the Arts and Crafts Movement, the Spiritualist craze was associated with progressive politics of the sort that the de Morgans supported, like women’s suffrage and pacifism.  Spiritualism was not thought to be inconsistent with science, not least with the theory of evolution, which was extended to the evolution of spirits after death and which explained the superiority of their knowledge to that of the living. Even the evolutionary biologist Alfred Russel Wallace was a Spiritualist. A Likely Story is dedicated to The Scientific Enquirer. 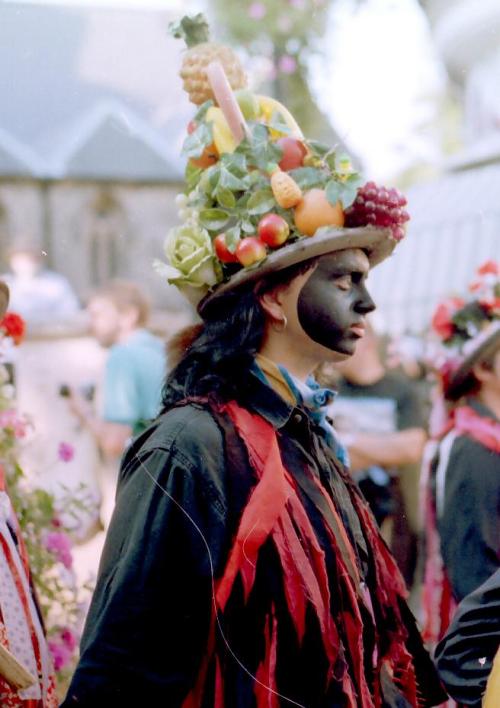 Border Morris is a style of folk dancing which involves black face, tattered clothes, big sticks and decorated hats. I saw it at the Sidmouth Folk Festival, when Flag Cracker (top), a side from North Yorkshire (they are called “sides”, not “groups”), came down in a big coach and performed, madly dressed and horrible looking, with amplified music and electric guitars, terrifying shouts and a crashing of sticks.  They were the Morris dancers from Hell, far removed from the prissy, white-shirted, hanky-waving, tinkling sort of Morris dancer. I am actually not a great fan of Morris dancing or even of English folk music, but I have been making images of this sort of performer ever since I first saw them. 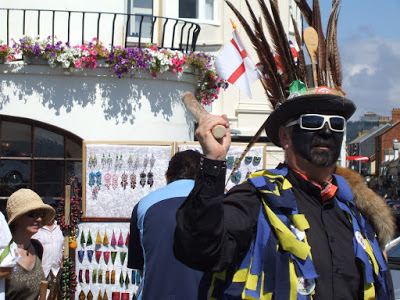 The dress has been exaggerated by some Morris sides, who have taken hat decoration beyond the traditional flowers and feathers to include plastic fruit, badges, stuffed animals, mirrors, wooden spoons, toys and all sorts of incongruous paraphernalia.  Many sides develop their own special dress.  Black Pig (below) are the most imaginative and colourful dressers. Beltane dress entirely in black.

Most of what you see is a late 20th century revival, populated by schoolteachers and IT consultants going mad at the weekend.  I think it started from nothing and grew by accretion, like roadside shrines to accident victims. Women now dance in Border Morris sides, adding variety to their gothic appearance.  Some of the groups, as you can tell from their names, have pagan affiliations. Border Morris is like Punch and Judy, though not as nasty. I like its look, set off by dark glasses, earrings and beards, ragged clothes, OTT hats and violent dancing. Some people have reservations about black face.  It may originate in a 15th century imitation of the Spanish Moors, it may not.  It may have been a form of disguise, it may not. It may have been reinforced by Minstrel shows, it may not. It is Cecil Sharp, punk rock, real ale and London Fashion Week all rolled in together.

The curiosity of this unsophisticated art is that it is displayed to ordinary people in nice towns like Sidmouth, Crediton, Newark and Cambridge. It may look like witchcraft and Hell’s Angels but it is about as threatening as “Where the Wild Things Are”. Yet it’s as perverse as all English things, and, as a folk tradition, much odder than, say, the street bands and secular parades you see in Italy . 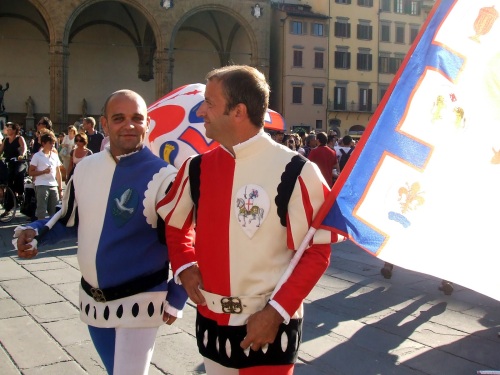