We went to the Estorick Collection’s postponed exhibition of the art of Tullio Crali A Futurist Life, the first devoted to him in the UK. Crali was a key figure in the second wave of Futurism, to which he remained attached with idealistic devotion, and the major proponent of aeropittura, painting inspired by aerial flight.

Crali was born in 1910 in Montenegro and spent much of his life in Gorizia, near Trieste. He developed an enthusiasm for Futurism as a schoolboy and taught himself to paint in a Futurist style. Marinetti wrote to him in 1929, “Dear Futurist, Delighted to have you with us in the Futurist struggle.” Meeting Marinetti, who favoured him with a smile, was the high point of his life.

This remarkable exhibition gathers works from the Crali family collection that span the artist’s long life (he died in 2000), many unseen for decades. His most famous painting Nose-Diving the City (which the Estorick included in its 2005 exhibition Painting the Skies) is not included, but his intoxication with flying is well-represented.

After the war the position of Futurists became difficult in Italy. Crali never had much interest in politics and engaged as a naïve patriot – “acquiescence”, the word the curators choose to describe his relationship with the regime, is accurate. In 1942 Crali and Marinetti produced a manifesto (always a manifesto!) about the potential artistic contribution to the war effort, Plastic Illusionism of War and Perfecting the Earth, whose ideas about camouflage did not appeal much to the military mind:

“Spiritualise materiality and vulgarity by means of gigantic winged colourful transparent free-word compositions in such a way that a smoking factory might metamorphosise into an evanescent mystical chapel fringed with angels and bells.”

Unlike Depero, who had to emigrate to the USA to continue as an artist, Crali survived with a teaching job in Italy. His post-war still lifes (above) gained in depth and subtlety.

Futurism was a way of life to Crali, not to be abandoned when circumstances changed. At a meeting of Futurists in 1950 – and I was surprised to learn that there was still an organised Futurist movement after Marinetti’s death – Benedetta Marinetti dissolved the movement, a decision Crali refused to accept, and in his own mind he remained a Futurist.

Teaching posts in Paris and Cairo introduced Crali, ever curious about his world, to new scenes, new people, new shapes and new possibilities. His late embrace of found art from rocks, the Sassintesi (“Stonetheses”) was, in his mind, still a Futurist enterprise.

A walk from Deal to St Margaret’s Bay, via Kingsdown and St Margaret’s-at-Cliffe, took in a variety of building styles, vernacular and polite.

Flint and brick is characteristic. 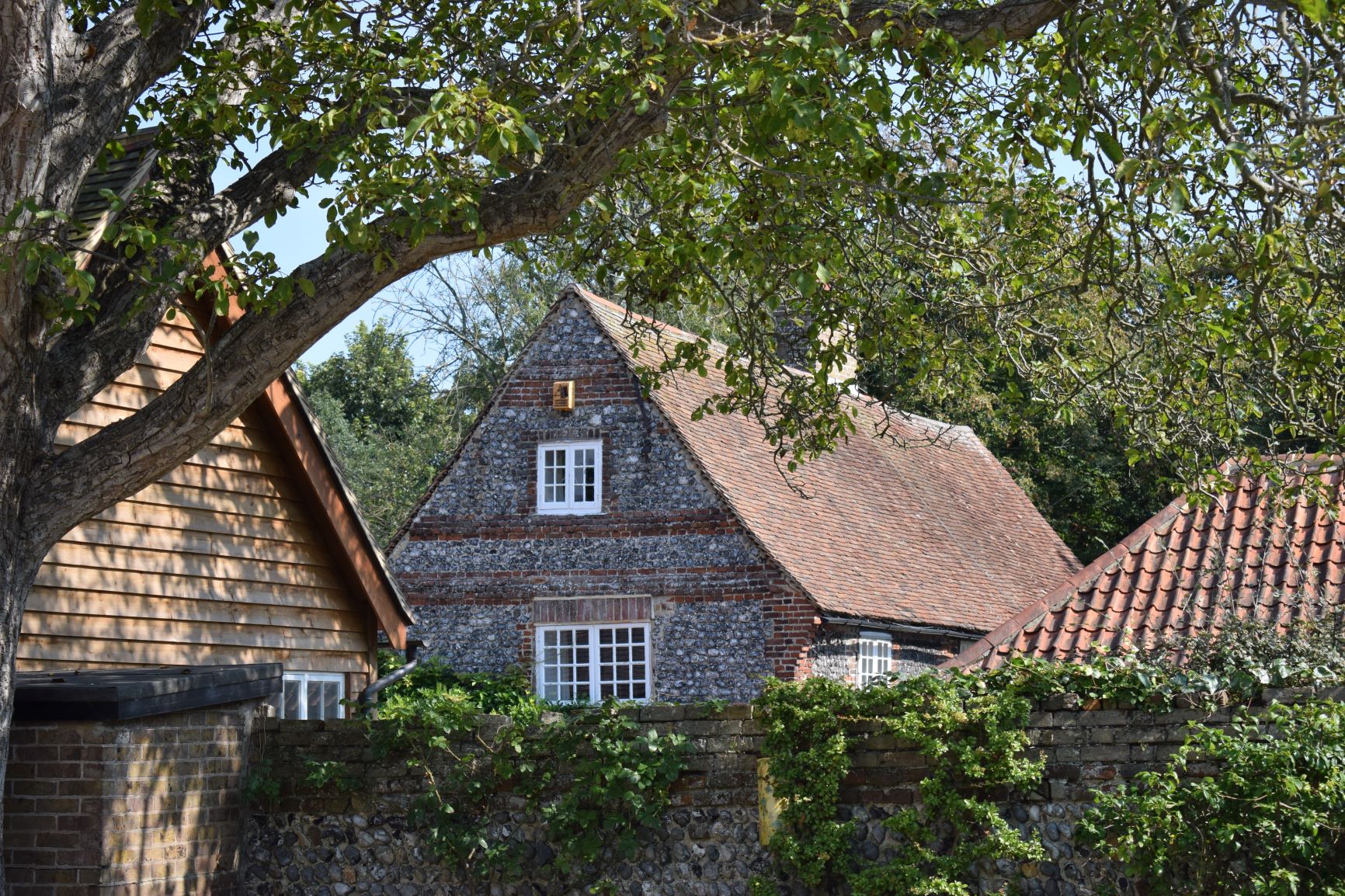 I liked the fretted fascia on this house. 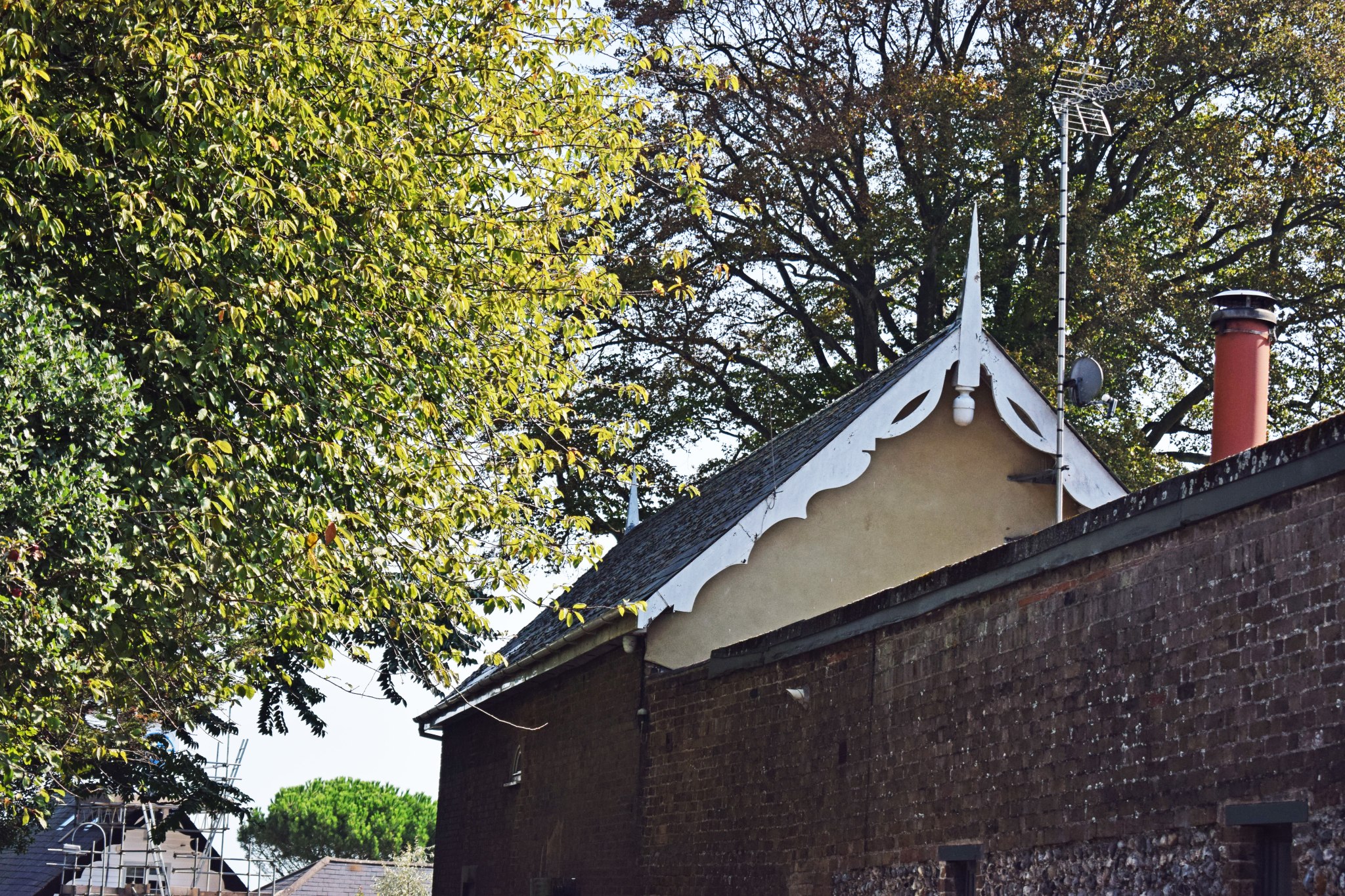 Kingsdown Cottage, one of a pair of Arts-and-Crafts houses on the outskirts of St-Margaret’s-at-Cliffe, with its roughcast walls, high chimneys and steep-pitched roof, recalls Voysey’s High Gaut in the same village (which we didn’t get to see), but I couldn’t find out anything about it. 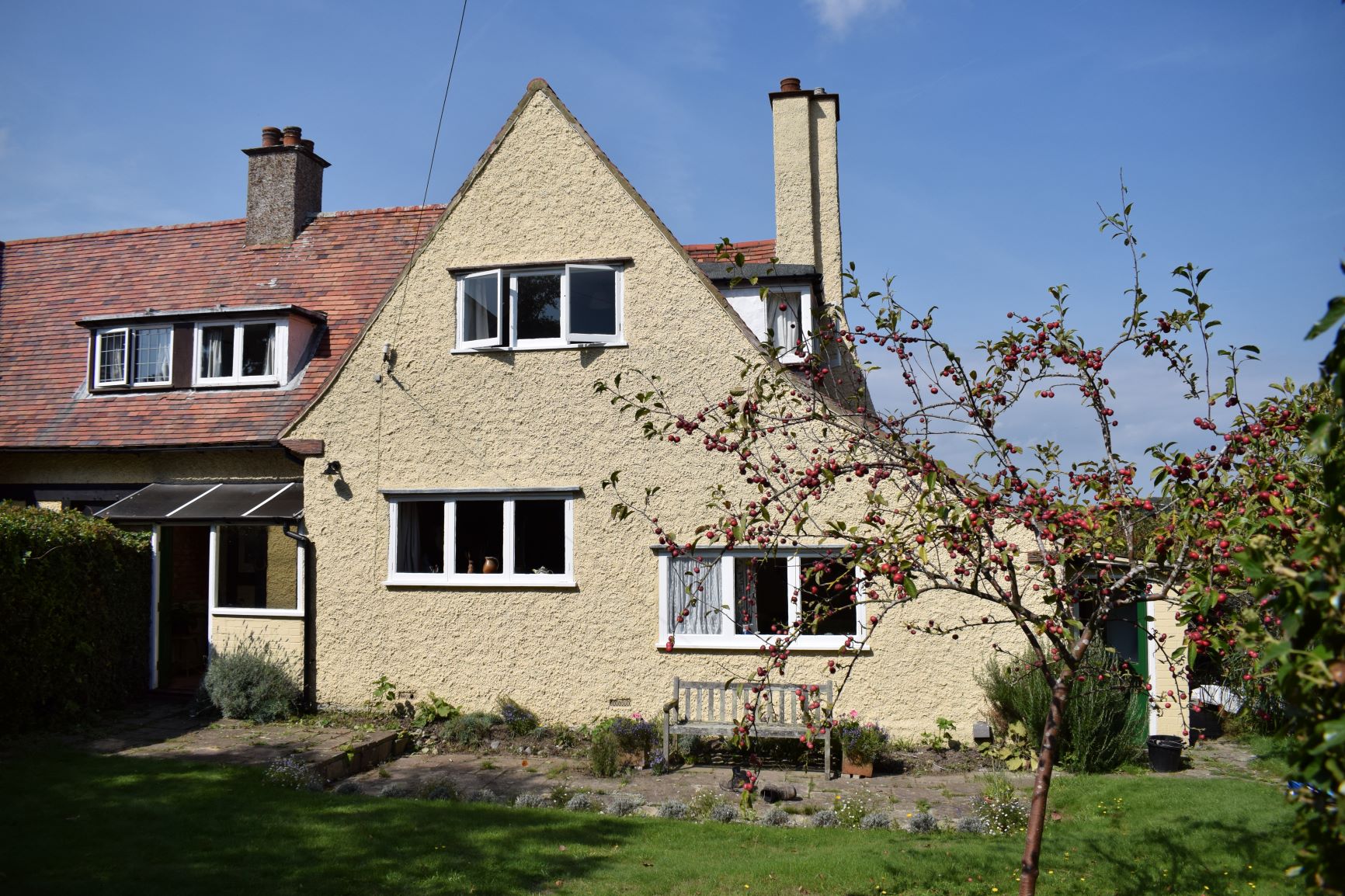 Portal House, a Kent County Council special school, is well described by its architects, KSS: “The double pitched roof concept for the new building draws on the local Kent vernacular, and the use of humble traditional materials with simple modern detailing gives the building a quiet but distinct contemporary identity.”

The star of our walk was Ness Point, a bold, orginal design by Tonkin Liu, with curving white walls that echo the White Cliffs. There are plans and more photos, including interior photos, at Design Curial. 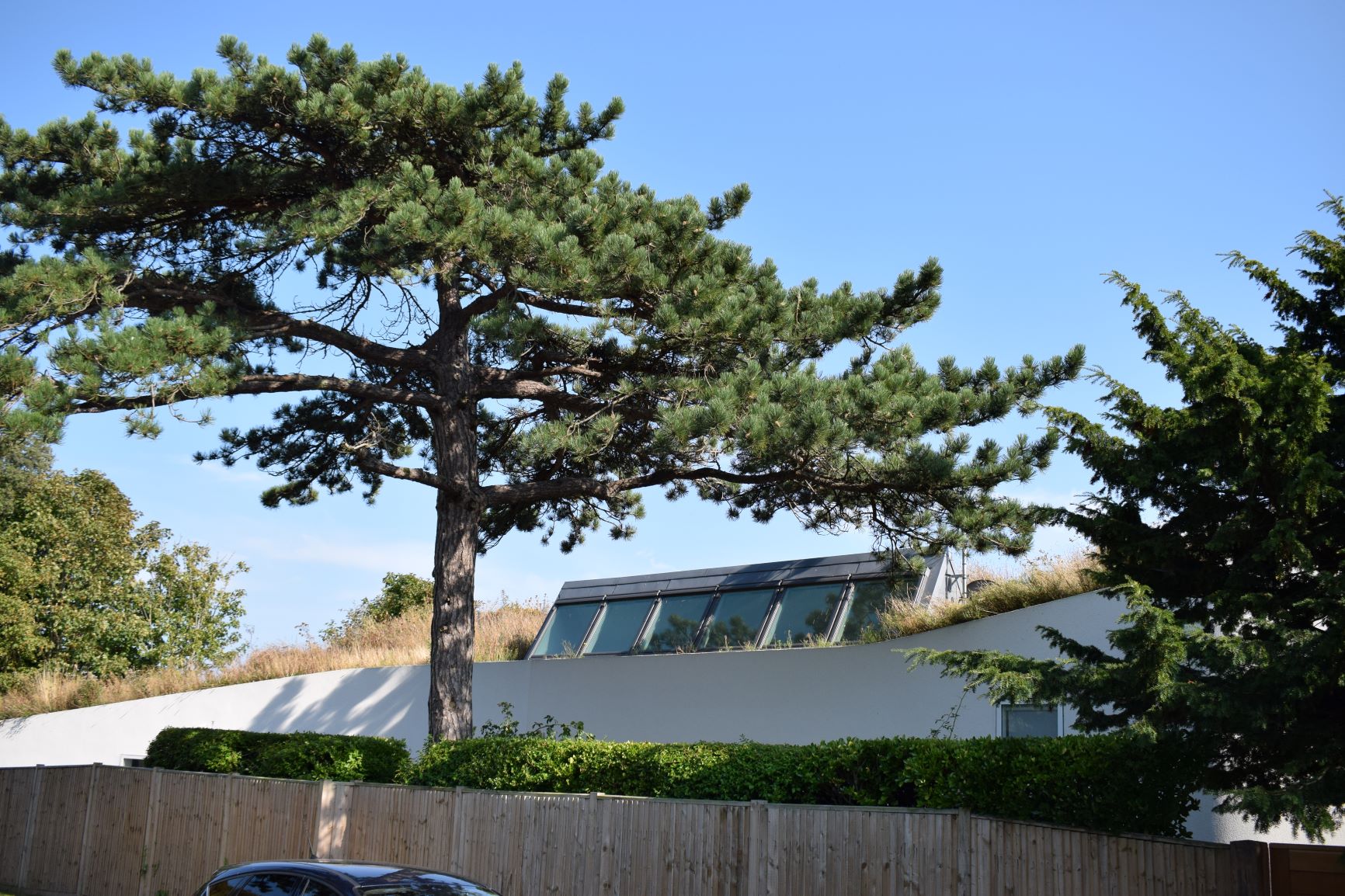 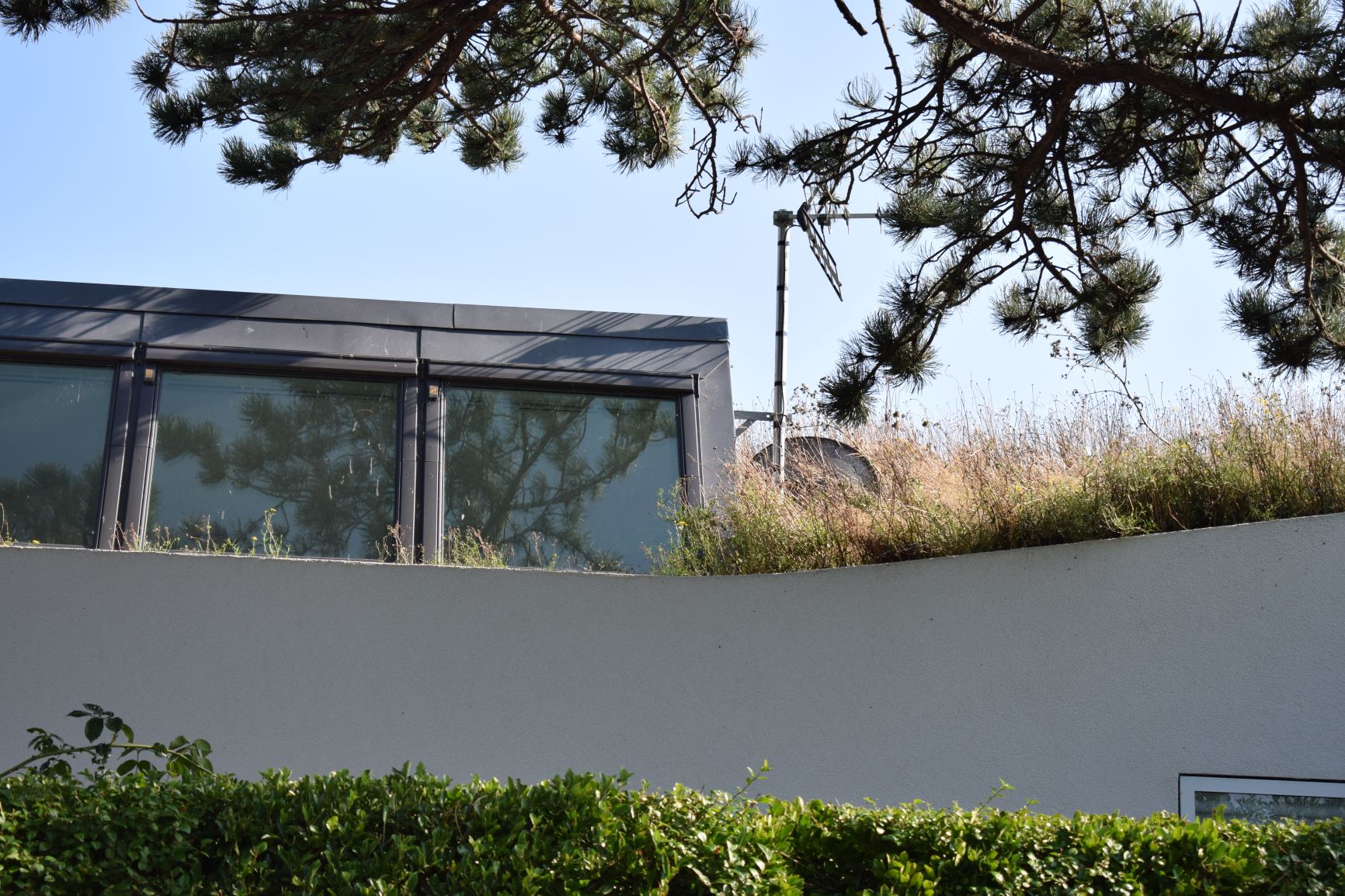 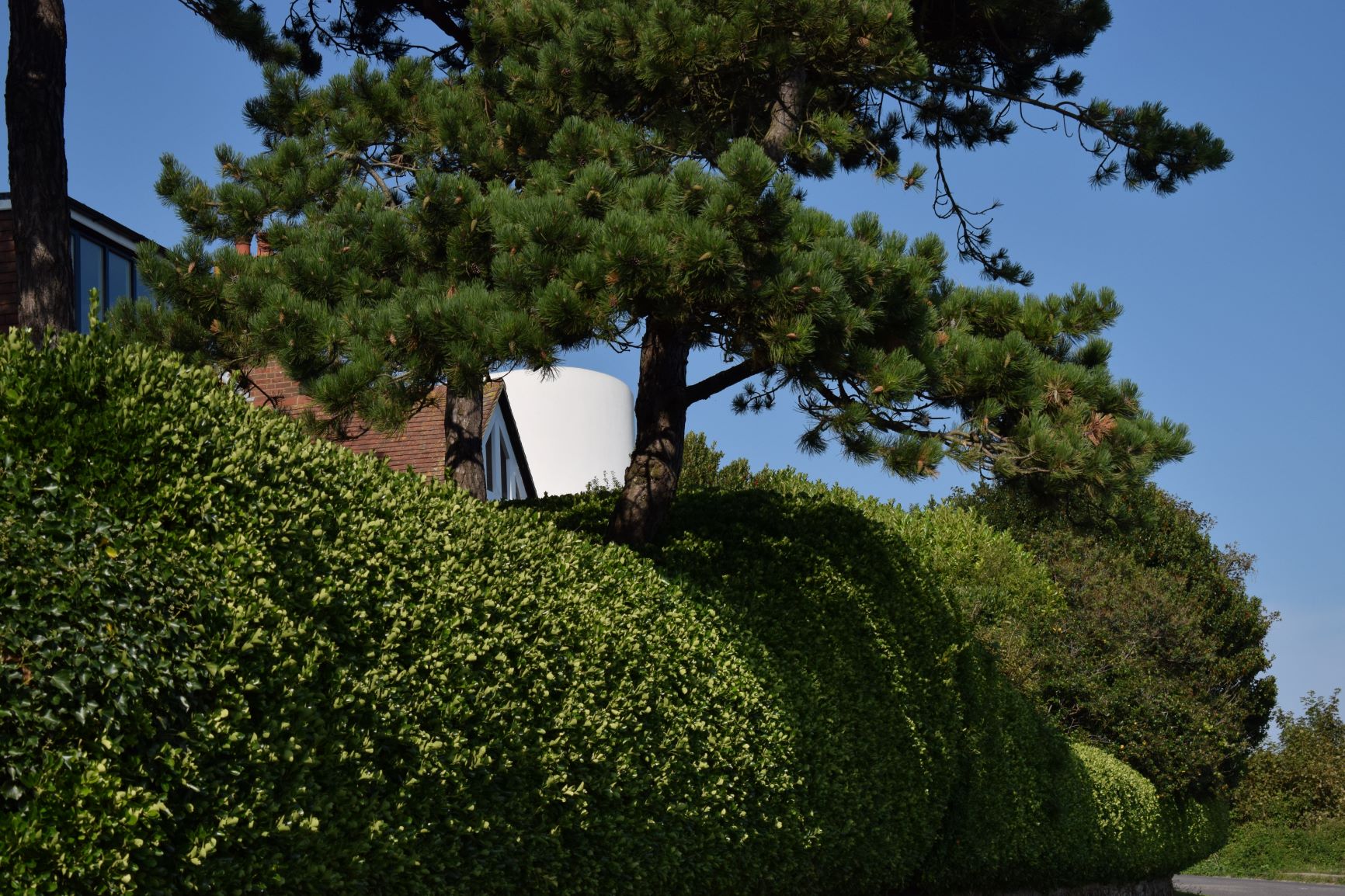 In ceramics, joie de vivre is usually associated with the Mediterranean – the tin-glazed pottery of Spain or Vallauris.  But there’s something about tin-glaze itself that brings it out, even in the north.  One of its great exponents was Stig Lindberg (1916-1982), the prolific Swedish designer who spent most of his career at the Gustavsberg pottery factory.

Lindberg studied at the Swedish State School of Arts, Crafts and Design in Stockholm, with the intention of becoming a painter. He started at Gustavsberg in 1937 and became their art director in 1949. He remained with the company until 1980, when he retired to Italy to set up his own studio. Much of his work was in faience, painted tin-glaze, in which he made a modernist re-interpretation of an old method of decoration, like these vases  from the 1950s (above). His faience designs were painted directly in-glaze, an expensive method of decoration also used, in a similar medium, by the Poole Pottery in Dorset.

In the 1950s, many of Lindberg’s forms were derived from biomorphism, a movement in painting and sculpture that evoked living forms but was generally non-representational. The most consistent exponent of biomorphism was Hans Arp (below). Many of Miró’s forms were biomorphic too.

Because of the diffusion of biomorphism into interior design it became emblematic of modernism. There were cartoons of puzzled museum visitors looking through holes in biomorphic sculptures – Anatol Kovarsky’s classic (below) was published in The New Yorker in 1947.

But the puzzled visitor went home and used biomorphic glassware, biomorphic ceramics like Lindberg’s, textiles with biomorphic motifs and even biomorphic furniture (below)