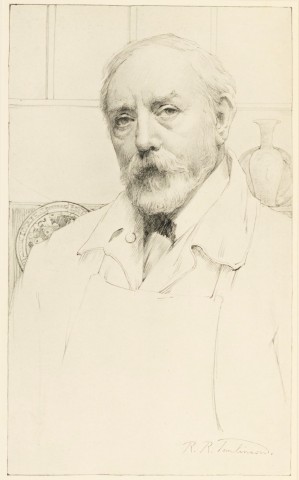 I saw some pottery made by Richard Lunn (above), who is important because he taught the first art-school course in pottery in Britain, set up at the Royal College of Art in 1901. Some pottery painting had been taught at art schools earlier and clay modelling was commonplace, but Lunn’s was the first course where students were taught to design, make, glaze, decorate and fire pottery from first to last. Even the Stoke-on-Trent art schools did not teach pottery in such a comprehensive way. As art schools in the early 20th century adopted similar courses, the graduates of his course provided several of the teachers.

Lunn’s pottery, in a private collection, was quite a find, because his own work is almost unknown. He worked as art director of the Crown Derby Porcelain company in the 1880s, and in the 1890s set up his own pottery in the old Cockpit Works in the town, but apart from these pieces, its output is unknown.

This collection of bowls place Lunn firmly in the tradition of Art Pottery. They are hand-painted in underglaze colours, each one with a different design, thinly potted in a cream earthenware body and probably made in moulds, a method Lunn favoured over throwing on the wheel.

The drawing of Lunn (top) was made by R.R.Tomlinson, one of his RCA students, who later became art inspector for the London County Council and principal of the Central School of Arts and Crafts in the 1940s when another of Lunn’s students, Dora Billington, was running the pottery course there.