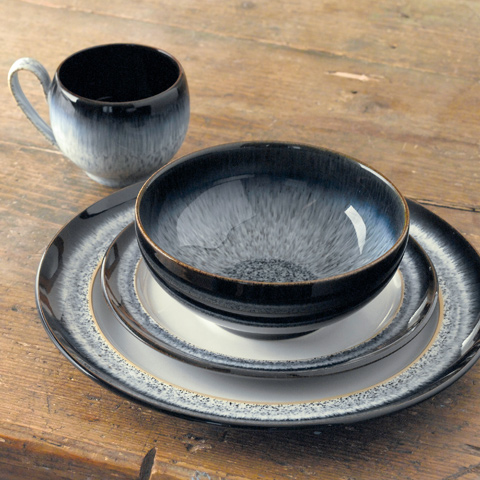 Since my visit to Top Drawer, where I saw how artisanal goods are so on trend that manufacturers of consumer products are striving to make their things look hand-made, I’ve been on the lookout for other ceramic tableware like that and I went straight to Denby, who have been aware of the craft niche since the 1960s. Denby “Halo” (above) uses a complex streaked glaze similar to that used by studio potters.

The idea of making things that look like craft products raises the question, “What does a craft product look like?” I keep going back to David Pye, who is one of the few people to talk sense about making, and who said, “Workmanship of the better sort is called, in an honorific way, craftsmanship. Nobody, however, is prepared to say where craftsmanship ends and ordinary manufacture begins.” (The Nature and Art of Workmanship) He didn’t think the term “craft” was particularly useful and preferred to distinguish between two kinds of workmanship, the workmanship of risk and the workmanship of certainty. The use of machinery helped to produce the regular, finished and repeatable products of the latter kind, but he further questioned the distinction between hand work and machine work, since – as everyone has known for a long time – a machine is a tool driven by some motive force, and the difference between hand power, water, steam or electricity is not important. He concluded that it was impossible to tell by looking at something whether it is the work of a “craftsman” or not.

Since it is difficult to tell from an object’s appearance whether it was made by a “craftsman” or was “manufactured”, the craftsman look can be easily produced under factory conditions.  In case there’s any doubt, the mugs below, by potter Chris Keenan, are handmade and look similar to the pottery made in Denby’s factory.