The Angels of the Apocalypse sculpture on the Seventh Day Adventist European HQ in St Albans faces on to the main street of the town and its angular shapes are familiar to everyone. So familiar to me that, despite having lived there for years, I’d never bothered to find out anything about it.

It’s by Alan Collins, ARCA (1928-2016), an English religious artist who lived much of his life in the USA and who taught at Seventh Day Adventist universities. His sculptures in Guildford Cathedral, better known but less visible than his St Albans angels, won the Sir Otto Beit medal in 1964, and he made the lettering on the Kennedy memorial at Runnymede, a remarkable commission because he did not specialise in letter cutting.

The Angels of the Apocalypse were made in 1965 in fibreglass for the Adventists’ building, a rare piece of

modernist architecture in a conservation-conscious town more interested in its Roman, medieval and Victorian past than in the 20th century.

The Oxford Dictionary of National Biography (DNB) is filling the gaps in its coverage of notable women and pottery is benefitting from the addition. I have been asked to write entries for Mary Wondrausch and Dora Billington.

Mary Wondrausch, who died in 2016, is well known to studio potters, especially those who are interested in slipware. She was important in its revival and wrote about it in a scholarly way (Mary Wondrausch on Slipware, A & C Black, 2001). Dora Billington (1890-1968), the most significant studio pottery educator in the 20th century, is less well known, even though some of her most eminent students (Alan Caiger-Smith, Gordon Baldwin and Anne Wynn-Reeves) are still alive. She began teaching pottery in the style of Alfred and Louise Powell but in the 1920s she responded immediately to the new pottery of Staite Murray and Bernard Leach. Her most important contribution came after the Second World War when studio pottery seemed to be full of second-rate Leach imitators. Taking her inspiration from the European tradition, she-encouraged new ways of making, notably the tin-glazed pottery of Caiger Smith, Wynn-Reeves and William Newland, and the sculptural ceramics of Baldwin and Gillian Lowndes. Her Technique of Pottery (1962) is still worth reading.

Perhaps there are other entries that could be written on women potters. The DNB has articles on Katherine Pleydell-Bouverie, Lucie Rie and Gillian Lowndes, but nothing at the moment on Louise Powell, Nell Vyse, Dora Lunn, Stella Crofts, Nora Braden, Ursula Mommens or Helen Pincombe.

I knew that Parma was the home of a great ham and a great cheese but I didn’t know that it was the home of the great printer and typographer Giambattista Bodoni (1740-1813) until I went to the exhibition of his books at the St Bride Library in the City of London, next to St Bride’s, the printers church. (Closes 12th October 2018.) 2018 is the bicentenary of his Manuale Tipografico, published posthumously by his widow.

Bodoni was the creator of the beautiful typeface named after him, a typical late 18th century innovation with a vertical emphasis and a strong contrast between thick and thin strokes. It is particularly good for title pages but was also designed as a book face. Bodoni’s practice was unusual in that he was type founder, printer and publisher, when the custom at the time was for booksellers to commission books from printers, who bought their types from specialist founders.

There is a biography of him in Wikipedia – its entries are variable but this account is good. He came from a family of printers and played with his father’s print paraphernalia as a boy. He started young in the trade, showed his brilliance quickly and his fame spread. He planned to come to England to work in Birmingham with John Baskerville, another great type designer, also an energetic businessman and political reformer, but was prevented by illness and went instead to work for the Duke of Parma in a small provincial town in northern Italy. He stayed there for the rest of his life, producing some of the most beautiful books ever printed. His elegant title pages, with few words, lots of white space and little ornament, have the “noble simplicity and calm grandeur” of neoclassicism. 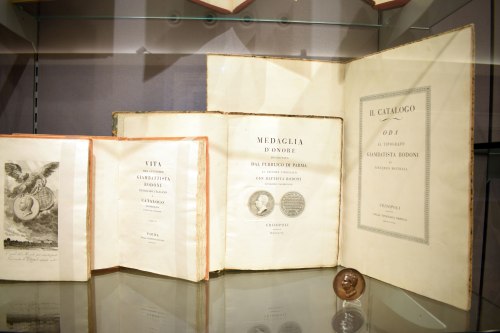 The curator at St Bride’s pointed out to me that, if you didn’t know anything about the history of type, you would think they were printed in the 1950s. I asked him if the books were all from the St Bride’s library. Some were, but most were his. He is a passionate collector of Bodoni editions and keeps his eye on Italian auction houses, going on buying trips several times a year. The Italians require export licences for anything over fifty years old, and after making his purchases he has to wind his way through the Italian bureaucracy to get these lovely editions out. He lives in a world of books. His wife is an antiquarian book restorer and has a workshop cluttered with bookbinding tools she has inherited from previous generations of bookbinders.

Twentieth century type founders reproduced Bodoni’s classic typeface and added condensed and bold forms for titling. To my eye, Bauer’s version is the closest to the original.

Bauer’s 20th century version of Bodoni, from The Encyclopaedia of Typefaces, by W.T.Berry, A.F.Johnson and W.P.Jaspert (London: Blandford Press, 1958)

We made the two-hour drive to Compton Verney to see the exhibition of automata, prompted by memories of the little museum of mechanical toys that there used to be in Covent Garden in the 1990s, and stayed to see the folk art from the collections of Andras Kalman and Enid Marx and Margaret Lambert. 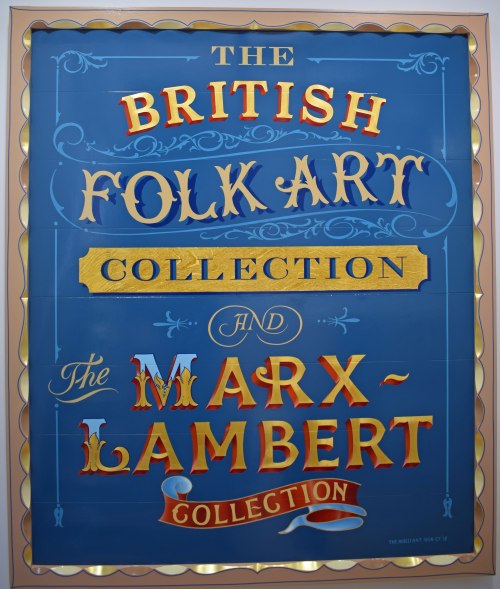 Marx started collecting in the 1930s, though her interest began earlier. She said she was influenced by what she learned from her father’s paper-making business, and at the RCA she failed to get her diploma from the painting school because her work was thought to be too vulgar. Kalman, a Hungarian emigré, began after the war, collecting mainly untutored paintings of the late 18th and early 19th century, usually rural, often of favourite animals, sometimes unintentionally funny. The Marx-Lambert collection includes print ephemera, scrapbooks, valentine’s cards, paper peepshows, children’s books, ceramics, corn dollies and toys and, from the period after the war, vanishing crafts. Deeply unfashionable at the time, these items could be picked up for pennies in junk shops.

Marx’s, Lambert’s and Kalman’s collecting coincided with the relaxing of the severe modernist contempt for anything traditional, un-functional or Victorian. Marx and Lambert’s When Victoria Began to Reign was published in 1937 and English Popular Art in 1951. 1951 was a significant date for folk art and Victoriana. Barbara Jones’s exhibition Black Eyes and Lemonade, a Festival of Britain event about English popular and traditional art, was put on at the Whitechapel Gallery in 1951, and her book, The Unsophisticated Arts – about fairground decoration, tattoos, seaside architecture and funeral ornaments – came out in 1952. (For long hard to find, there is a new edition.)

This interest in the vernacular and the curious mitigated the modernism of the Festival of Britain, which stimulated interest in the period of the Great Exhibition a hundred years earlier. The Festival Funfair at Battersea featured Rowland Emett’s whimsical and nostalgic “Far Tottering and Oyster Creek Railway“. And so, full circle – Emett’s railways were a feature of the automata exhibition at Compton Verney.