The García Sanabria Park in Santa Cruz is a restful evergreen space made in honour of a city mayor, though the Rambla de Santa Cruz on which it stands, with its central avenue of shady trees, is restful enough. All paths in the park lead to a fountain monument, erected in 1938, conceived by architect José Enrique Marrero Regalado and designed and executed by sculptor Francisco Borges Salas.

On one side is a relief portrait of Sanabria, on the other, in the fountain pool, is a far-from-idealised female figure, Fecundity (above), who gives her name to the sculpture. On the third side is a figure representing Work, on the fourth, a nude male (below) that struck me because he holds a six-pointed star, a symbol not to be expected in a fascist country with no Jews (Franco began his rebellion in Tenerife), though in fact the star represents The Future. 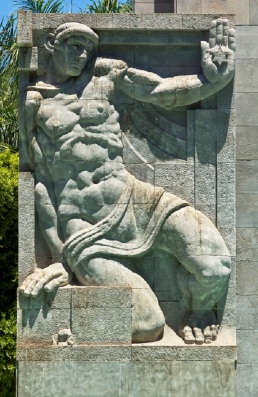 “Fecundity” has had a chequered history. Long regarded as the most significant piece of public art in the Canary Islands, in 1950 it was condemned as immoral and removed from the park until 1970. It is thought that the censorship was a cover for jealousy of Salas by influential colleagues.