I’m exhibiting with the Dacorum and Chiltern Potters Guild at Kingsbury Barn St Albans, built by St Albans Abbey for threshing in the fourteenth century. It’s a wonder of vernacular building, its beauty of form and texture arising simply from the methods and materials employed. I’ve borrowed the excellent pictures from the Kingsbury Barn website because they’re better than any I could take and give a very good impression of the structure. The barn was restored about ten years ago at cost of £1 million. 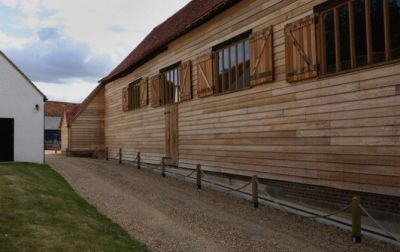 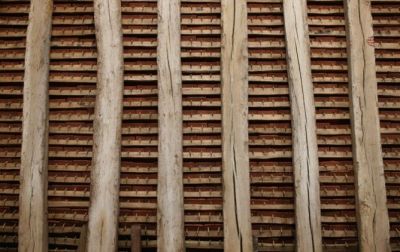 The Abbey was a major landowner at the time of building and the barn obviously represented a huge capital investment, its size indicating the extent of their lands and the amount of grain they harvested. It’s supposed to have been part of the Abbey’s programme of attracting farmers after the the Black Death, but the increase in the price of labour gave the peasants confidence and there was a major revolt in 1381, led by William Grindcobbe, whose name suggests that he was a miller with a grudge against the Abbey’s monopoly. The revolt focused on the Abbey gatehouse, but I’d be very surprised if the peasants didn’t attack the Kingsbury Barn half a mile away.

It’s now used for weddings and exhibitions and local residents complain if there’s too much noise. Grindcobbe, you have been warned.