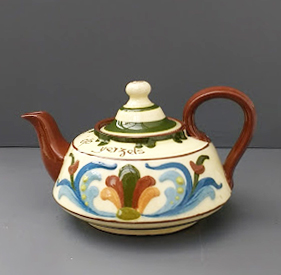 Something quite different from the didactic exhibitions of industrial design I’ve been writing about recently –  a Torquay ware teapot (above). I bought this one from a charity shop today. I’m sure these popular items would have been execrated by the leaders of good taste.

I wrote about Torquay ware in another post, saying that it was made from the local brown clay, was covered in white or blue slip and then decorated, either by scratching through the white to make a line of brown, or by painting with coloured slip. It was made for tourists, who paid sixpence for it, and although it’s pretty and cleverly made, the sheer quantities manufactured means it’s still cheap in the shops. 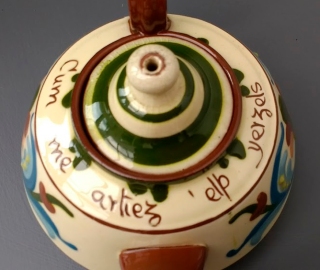 It was made by the Aller Vale Pottery, which closed in the 1920s, so it has been kept on a shelf for at least ninety years and well looked after. The “Scandy” pattern (rather like Prince of Wales feathers) on the side was used by many of the potteries in the second decade of the century – they ruthlessly plagiarized one another in search of the holidaymaker’s sixpence.