Why are we so in love with the past that we can’t build for the present? 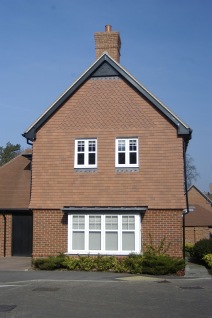 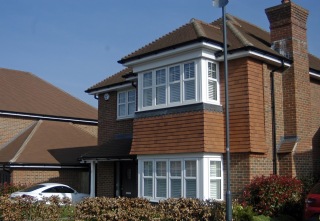 The hung tiles, bays, dormer windows, small-paned windows, steep-pitched roofs, door styles and prominent chimneys are copied from not from vernacular architecture but from the Arts and Crafts copies of vernacular architecture. At the same time, the estate manages to be bland. With few exceptions, present-day housing is built in this twee toytown style. It has to be forced into modern building standards, modern ceiling heights, modern light standards, modern densities and with modern accommodation for cars, so it’s not just twice false but thrice false. No other European country builds houses like this
Jonathan Meades traced this disease to Letchworth Garden City, which he said set the style for suburban domestic architecture until the Second World War, so that every street in England looks like Letchworth. He was not quite right: after three post-war decades, in which some attempts were made to build houses that looked as we had designed them and not our great-grandparents, the disease has come back. Hatfield New Town, which build for the present, now has a rash of Tudorbethan houses on the former British Aerospace site.
Of Letchworth Meades said:

“We walk forever down false memory lane, yearning for the place where the oak was beyond a joke, for the time when the quaintness was 100% proof. An Englishman’s home is his fantasy. We’re so inured to architectural escapism that we hardly acknowledge it. And we hardly stop to consider that the bucolic past that such houses represent was brutal, callous, cold, diseased, incestuous; and that our forebears spent much of their lives in pain.”

This Romantic preoccupation with the past is the reason why we have still have a school system designed for Oxbridge entrance, why we can’t train enough people for our economy, why industrial productivity is low, why we can’t modernise our legislature, and why we want to leave Europe and return to the days of unregulated businesses that put children up chimneys. If we made these quaint housing estates with proper chimneys we might be able to do that again.