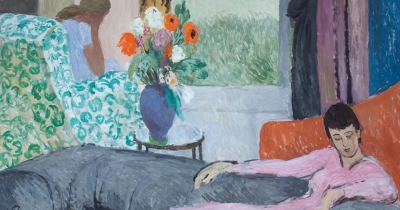 The Dulwich Picture Gallery manages its small size and off-centre location well with appropriate and popular exhibitions. Its Ravilious show last year was perfectly suited to the building and its current exhibition of paintings and designs by Vanessa Bell fills a similar slot.

Bloomsbury is endlessly popular, cautiously modern and very English despite its connection with French painting of the early 20th century. Virginia Woolf said that after Roger Fry’s 1910 exhibition of French Post-Impressionists the world was never quite the same. Bell was gripped by Post-Impressionism.  In this exhibition we see a collection of accomplished portraits, still lifes and landscapes dating from about 1910 until the 1950s. There is also reference to Bell’s interior design, textiles and pottery, to which her decorative style was well adapted and which I would have liked to see more of. Photographs and letters illuminate the creative life of Charleston Farmhouse.

I wrote in another post about Bell’s cautious modernism and how, once she had discovered Post Impressionism, she never looked forward. This exhibition confirms her artistic stasis. What she painted in 1954 was hardly different from what she painted in 1914. There were tentative forays into Cubism, but without conviction. Surrealism might never have happened. Nor within her chosen style could I discern artistic doubt, exploration or self-criticism. Despite her early adoption of the art of the avant garde, she became a comfortable artist of the arrière garde. That may be excused by the fact that her whole life was a work of art. She made Charleston the hub of Bloomsbury, brought up a family and always had a house full of brilliant guests. And so she gives the impression of happily painting away without much curiosity about what was going on elsewhere.

Bloomsbury is popular with the English middle class because it is the image of the free artistic and intellectual life that they cannot have. Virginia Woolf is one of the greatest of 20th century English novelists and Maynard Keynes was one of the greatest intellects. But their visual art did not develop and their Bohemianism does not attract me. It depended on servants, it was shot through with anti-Semitism and a self-centred pacifism. Angelica Garnett writes of a Bloomsbury childhood that left her pretty screwed up.

If you would like a more sympathetic view of Vanessa Bell, here is co-curator Ian Dejardin, talking about her abstract designs of the 1910s.