Mary Wondrausch, the great English potter, died yesterday. Three years ago, aged 90, she stopped taking her medicines. She said, “I feel there’s something wrong with a society that’s being kept alive when there aren’t enough young people to support all these old people.” She was always strong-minded. I bought a pot from her twenty years ago and asked, “Shall I make out the cheque to Mary Wond-rush?” She replied haughtily, “The name is Vund-rowsh.”

Wondrausch was born in Chelsea and trained as a painter. She was married three times and had three children by her last husband, a Polish architect. She worked as a cook, a painter and a teacher before turning to pottery in her forties. Teaching art in a boy’s prep school in the 1960s, she became dissatisfied with her role and began to question art itself. She attended Farnham art school to study ceramics and worked slowly through the early “ash-glaze and Leach syndrome”, but gradually began to find the slipware pots she saw on continental holidays more sympathetic. 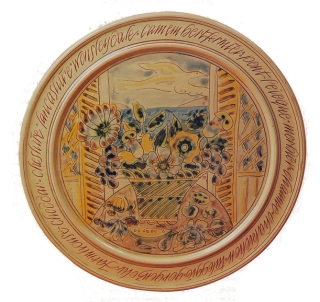 Then she discovered Ronald Cooper’s book Slipware Dishes,1650-1850 and visited the Glaisher collection in the Fitzwilliam Museum in Cambridge, which has a quantity of traditional English pottery. She fell in love with English 17th century slipware. “I had painted in watercolours,” she said “and the challenge of slip-decorated earthenware was, in a sense, similar. Each mark that you make is irremediable, and there are no kiln accidents to soften or enhance the decoration and glaze.” By contrast, the Leach style of pottery had come to feel unsatisfactory to her because of its over-dependence on kiln effects. 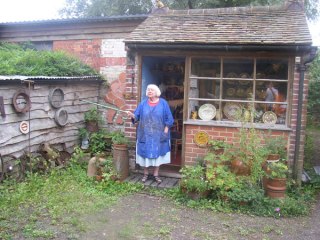 In 1975, after a few years of practice, she set up her own pottery workshop in Godalming, moving it to her house “Brickfields” in 1984. She sent pictures of her best work to The Times and her career suddenly took off with an order for a thousand ashtrays, all hand lettered. Assisted by Dilla Davis, she worked twelve hours a day to fulfil the order, staggering to the pub at the end of each session for a large whisky with Guinness chasers.

Her inspiration came largely from motifs in ceramics. “I find that I get absolutely no direct inspiration from nature, despite the fact that I live in a beautiful rural situation and am surrounded by nesting birds and blossoms.”

Wondrausch became the doyenne of slipware pottery in England, a fluent practitioner of the art and its most knowledgeable historian, with an enviable collection of country pottery and slides of slipware work from all around Europe.  She was an articulate and compelling lecturer.

Let her describe what slipware is.

“What is meant by ‘slipware’? It sounds like skating or sliding, not like pottery, and many people seem to be unclear about the meaning of this term.  First, it is lead-glazed earthenware. … Secondly, the pots are decorated with coloured ‘slip’ before they are fired in the kiln. Slip is clay mixed with water. … It has a thin, batter-like consistency and is usually of a contrasting colour to the body clay; for example, white on a red clay. … All work that is earthenware and decorated in any way with slips before firing is slipware.” The main methods are trailing a line of slip through a fine tube, scratching through a slip of one colour to make a line of a contrasting colour by revealing the clay beneath, or painting. 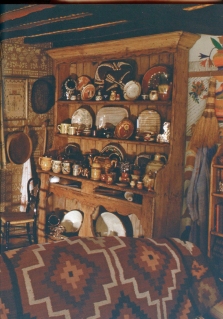 The golden age of English slipware was the 17th and 18th centuries, then it faded away. Wondrausch thought there were two reasons for its cessation. “First, changes in fashion: there was a swing to the classical mode (for example Wedgwood’s Etruria ware) far removed from the ebullient style that Charles II brought with him from France in the 1660s. Second, slip trailing is a very difficult medium and needs not only great skill but also the right workshop conditions, which did not somehow suit the incoming technology.”

She collected not only slipware but, magpie-like, all sorts of pretty and curious things, which she illustrated in Brickfields, the biography of her house: pottery, kitchen implements, rugs and tapestries. She was a cook, a gardener and a forager. “In the early spring, I am out with my basket picking the wild greens – all when the leaves are small. Hogweed, ground elder, dead nettle, sorrel, wild garlic, dock and dandelions. Rinse and cook for about eight minutes then serve with lots of butter and black pepper.”

She was a Fellow of the Craft Potters Association and has work in the Victoria and Albert Museum. In 2000, at the age of 76, she was awarded the OBE for services to art. She dressed with panache for the ceremony (top), in scarlet and magenta, with sandals, and a papier mâché hat based on one of her plates.

You can hear Mary Wondrausch talking at length about her interesting life in the British Library Sound Archive, available online here.

There is more about modern slipware pottery here.