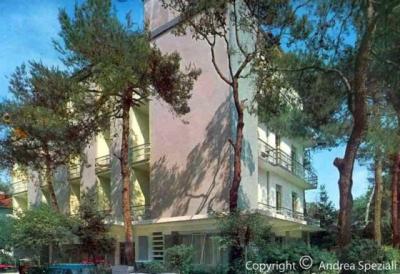 I recently went for a holiday to Riccione after an absence of fifty years. I remember the visits with my parents to this Adriatic holiday resort in around 1960, when abroad felt much more foreign. To a boy who had always lived in England, everything in Italy was new: sunny weather for two weeks, fizzy water, huge peaches, coloured matchboxes, even the plugs in the washbasins. Today, when you can get zucchini, parmesan and fresh pasta in the supermarkets every day, Italy seems more familiar. But a vague and abiding memory, formed at a time when I was just developing an interest in design, is the modernism of the hotels. Wide and airy, svelte and rectilinear, they were Italian cool, like the men’s fashion that became Mod.

After such an interval, I recognised nothing of Riccione. There has been a lot of development along the Viale D’Annunzio northwards towards Rimini. The older hotels in the Viale Milano  and Viale Gramsci had so many alterations and accretions that it was hard to see their original form. The Palazzo del Turismo in Viale Dante, built before the war, has had a third storey added. Two of the great hotels, The Grand and the Saviole Spiaggia, were closed for redevelopment and it seemed that work might have been stopped by the financial crisis. But if you look above the shops and restaurants in Viale Dante to the flats on the upper floors, you can excavate the archaeology of post war Italian modernism. 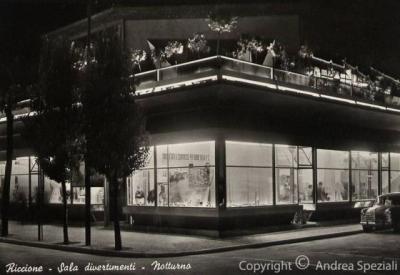 Riccione, with its wonderful climate and long sandy beach, became a holiday resort in the early 19th century, popular with the Bolognese middle class seeking relief from the August heat. By the First World War, it had many villas, some of which still exist but many of which were demolished to make way for hotels in the 1950s. In the small streets running at right angles to Viale Dante, and in the narrow tree-lined Viale Trento e Trieste, scented by plane trees, there is a mix of holiday homes and small hotels that still have the atmosphere of an old resort. 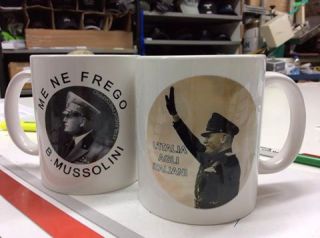 In 1934, Rachele Mussolini bought a villa in Riccione, now the Villa Mussolini. Mussolini’s patronage of the resort, with his well-publicised sea bathing and his gunship anchored offshore, helped to popularise it. There are still unpleasant echoes of this era in the mugs and plaques on sale in tourist shops with portraits of il Duce and slogans like Me ne Frego (I don’t give a damn) and l’Italia agli Italiani (Italy for the Italians).

In the 1930s, the modern layout of Riccione, “The Green Pearl of the Adriatic”, was created, with its broad promenades, tree-lined avenues and hotels on large plots with pine-studded gardens. (The poster above is reminiscent of paintings by the Futurist artist Prampolini, a loyal admirer of Mussolini.) After the Second World War, Riccione was developed for mass tourism, but it also became a fashionable destination, visited by Gina Lollobrigida, Vittorio Gassman and Vittorio De Sica – rapidly followed by the paparazzi.

Out of ignorance, we spent a week in Bologna in August, when the stifling heat had driven the Bolognese away to Riccione, and we went to Riccione in September, when everyone was piling into the trains to go back to Bologna, and it started raining on the beach. But Viale Dante and Viale Ceccarini were still thronged for the passagiata, with a mixture of families, young people and old age pensioners (the shop selling cheap reading glasses was always full).

In these postcards from the collection of Andrea Speziali, the hotels and a cinema of the fifties and sixties are shown as they were built, without additions, at the high tide of modernism when their clean outlines were valued and admired in Riccione. 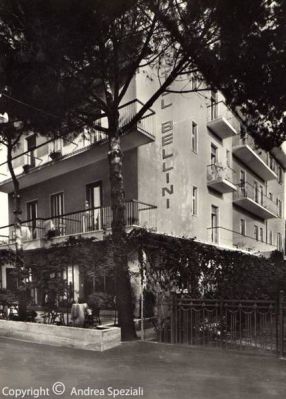 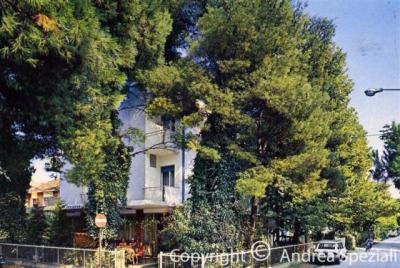 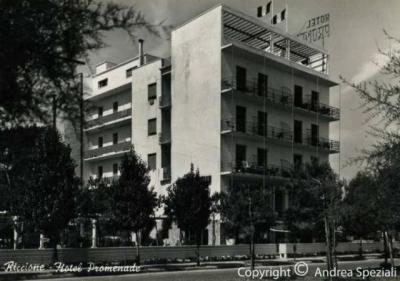 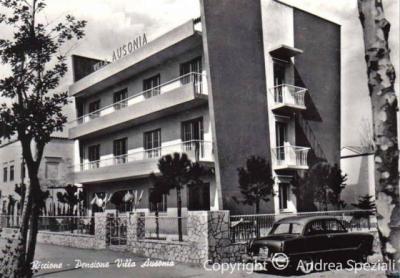 One thought on “RICCIONE: MODERNIST HOTELS BUILT FOR MASS TOURISM”