The Art Nouveau tomb of the Schmidl family in the Rákoskeresztúr Jewish cemetery in Budapest, made for Sándor and Róza Schmidl, is one of many grand mausoleums of the Hungarian Jewish bourgeoisie. It’s in good condition, having been recently restored.  It attracted me because it’s predominantly ceramic, manufactured by by the Zsolnay factory, who are famous for their Art Nouveau pottery.

The designers were Béla Lajta and Ödön Lechner. Schmidl had previously commissioned Lajta to design his grand grocery store in Budapest (pictured). The connection with Zsolnay came through Lechner – the two had worked together  designing iridescent stove tiles and architectural ceramics. Zsolnay also made the roof tiles of the Matthias Church in Budapest.

After Vilmos Zsolnay’s death in 1900, the factory lost some of its vitality and originality, but the Schmidl tomb was made before his influence was exhausted and is an extraordinary flowering of ceramic art. The ceramics are sculpted, textured and glazed a beautiful turquoise blue. 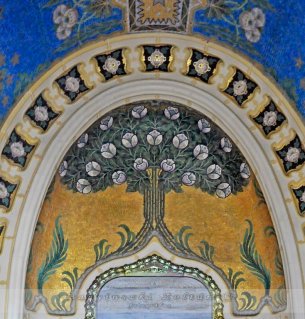 Within the tomb are some Hebrew inscriptions and mosaics showing the Lion of Judah, but otherwise there is little Jewish about it, typical of the Neolog (Reform) Judaism of Hungary. The majority of Hungarian Jews, especially in the cities, are Neolog and the orthodox are in the minority.  Some tombstones in the Neolog Rákoskeresztúr cemetery have no Hebrew inscriptions at all. 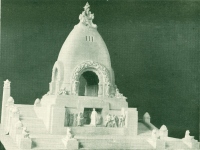 There are grand tombs along the North wall – Art Nouveau , classical and eclectic. Eli Valley describes these almost secular tombs as ohelim, tents, in which it was traditional to bury outstanding members of the community. The Schmidl tomb is an Art Nouveau ohel with oriental touches. It was a style Lajta used in works for Gentile clients, including his competition entry for the tomb of Lajos Kossuth (pictured).