When A.W.N.Pugin built The Grange, his house in Ramsgate, in the 1840s, he put large bolts on the doors and made sure the windows were secured at night because he feared revolution in England. Wasn’t that a bit far-fetched, the fantasy of a mad Catholic Tory?  After all, the French Revolution had ended thirty years before. Well, what was happening to us thirty years ago?

Plans for a Channel Tunnel were underway. There was the Chernobyl disaster.  The privatization of the buses and British Gas began, seting in train the programme of wholesale de-nationalization. GCSE examinations replaced GCE ‘O’ Levels and CSE. The M25 was opened. For adults these are current affairs. In the early 1840s, the French Revolution was similarly alive in the minds of Europeans.

Pugin was the propagandist for the Gothic Revival. It had started with follies and romantic castles in the late 18th century, but Pugin, who worked with his father making detailed and extensive studies of Gothic architecture in Europe, turned it into a religion. “Gothic is not a style, it is a principle”, he said, and his love of Gothic led him into the Roman Catholic Church. His most public monument is the Big Ben tower in the Houses of Parliament and his gem the decorated church of St Giles, Cheadle.

I went to see the Grange at the suggestion of my old friend Hugh Thompson, who was curious about how every nineteenth century suburban house seemed to have churchy bits of stained glass in them and often other Gothic features as well. We started from St Pancras International station, the red-brick Gothic colossus in Euston Road. It’s next to the simpler Kings Cross station (pictured), whose great engine sheds are visible from the street as you would expect from a functional building.

The proto-modernist Kings Cross is actually 16 years older than St Pancras, illustrating the 19th century battle of styles between Neo-Gothic and Neo-Classical. The battle was political: Tories were for Gothic and Liberals were for classical. Gilbert Scott, who designed St Pancras, submitted a similar design for the Foreign Office. The Liberal administration wanted a Classical building and sacked Scott, so he adapted his Foreign Office for the railways.

By the time Pugin built The Grange, in his early thirties, he had already had a long career. Having worked for his father from his early teens, he set up in business on his own at the age of seventeen. His capacity for work was enormous, driven partly by his bipolar personality. His office hours were 6 am to 10 pm. Between the ages of 26 and 28 he designed two cathedrals, a couple of monasteries and half a dozen churches. Punch kindly mocked him as the architect who could design a cathedral in 45 minutes. He had developed intellectually at a great pace as well, and had moved from the imitation of medieval models to the idea that the modern age needed to absorb the principles of Gothic and interpret them to make appropriate buildings that were not mere copies. The Grange was simpler than I imagined it would be from my superficial understanding of Gothic architecture. Although the wallpapers are rich in colour and pattern, they are not fussy. The furniture and joinery are plain. The carpets are woven in only a few colours. The garden is virtually empty, precisely as Pugin designed it. Pugin, who exhibited at the Great Exhibition of 1851, worked with the organizers, Henry Cole, Richard Redgrave and Owen Jones, on the selection of the best items from the exhibition for what became the Victoria and Albert Museum. No wonder Pevsner enlisted him as a pioneer of modern design.

Plugin’s piety and eccentricity made the building of a church, St Augustine’s, next to The Grange a necessary part of his plan. (There is also a private family chapel in The Grange.) He wanted to make it like a simple Kentish seaside church. It is asymmetrical with a nave and single aisle of equal width. An interesting Puginesque feature is the rood screen, which was originally built in front of the chancel. Pugin had the fixed idea that Catholic worship in England required rood screens to separate the Mass from the congregation. The idea was not widely accepted, even by English Catholics, and Pugin had to fight some of his clients over it, but St Augustine’s was built with his own money and he could do what he liked in it. 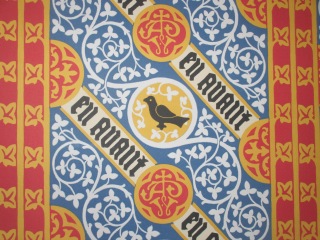 Today the rood screen has been moved from the chancel to a side chapel. Pugin would be on his own now: seventy years ago the Pope declared that Mass must be democratized and rood screens taken down. At St Augustine’s the priest plans to move it back again. I asked our guide what that would mean for the celebration of Mass? The priest is a clever man, I was told: the rood screen will be replaced but the altar will be put on wheels so the congregation can participate. St Augustine’s can be Puginesque and democratic at the same time. The revolution has finally reached Ramsgate.