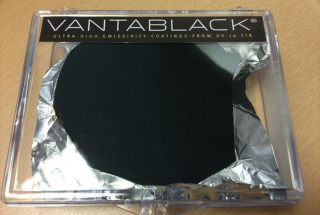 Artists have been getting heated about a story that Sir Anish Kapoor has bought the exclusive rights to the world’s blackest material, a pigment called Vantablack that absorbs 99.9% of incoming radiation. It’s an odd story.

Christian Furr  told The Mail on Sunday, “I’ve never heard of an artist monopolising a material. Using pure black in an artwork grounds it. All the best artists have had a thing for pure black – Turner, Manet, Goya. This black is like dynamite in the art world. We should be able to use it. It isn’t right that it belongs to one man.”

That’s debatable. Vantablack is a commercial product and the makers, a research company called Surrey NanoSystems, are entitled to recoup their development costs and sell it for as much as they can.

Early work on the material was done by the National Physical Laboratory and similar materials have been used on the Stealth fighter plane. Governments have deep pockets and selling into the defence market might have been a good choice for the Surrey University spin off company.

In 2013, Ben Jenson of Surrey NanoSystems said, “We are now scaling up production to meet the requirements of our first customers in the defence and space sectors, and have already delivered our first orders. Our strategy includes both the provision of a sub-contract coating service from our own UK facility, and the formation of technology transfer agreements with various international partners.”

No mention of artists, but Kapoor, who has made creative use of pigments in his art, showed an early interest in the material and Surrey NanoSystems have confirmed that now only he can use it. I find that astonishing, but not because I share Christian Furr’s utopian idea that companies should give away their intellectual property to artists. After all, artists are justly annoyed if their copyright is infringed and get fed up with charities asking them to work for nothing. What I find astonishing is that Kapoor has outbid every industry and government. Perhaps the paint was over hyped and despite the makers’ early leads it wasn’t much use for anything. Kapoor is worth £680 million and must have paid a large sum for the rights, at least six figures. That’s a good deal for a small R&D company.
_______________________________________________
CLICK HERE FOR NEWS OF UPCOMING EVENTS