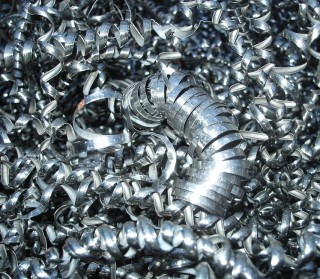 How many times have you read that, only to be told by the company when you ask them to mend your doorbell, “Sorry, it’s too small to be economic”? Well, I found the perfect engineering firm for which it was true: no job really was too small.

My second hand Fitzwilliam potter’s wheel required a modification, just a block with two holes in it and two retaining bolts. In the old days, Mervyn Fitzwilliam, the designer and maker of this Rolls Royce of potters’ wheels, would have done the job for me, but sadly he died, too young, a couple of years ago. Then I found a little company that was willing to have a look at it. “We’re very busy, I’ve got someone just had a baby and two guys on holiday, but I’ll try and fit it in.”

They’re at the blind end of a narrow lane, all the other buildings are Victorian cottages, you can hardly get your car down and wonder how the hell you’ll get out again. The factory is also old, small and crammed tight with machinery, swarf everywhere, odd shaped parts being cut, turned and drilled. Tinker, tailor, potter, engineer – stick to what you’re good at and do it well.

The boss told me to have a word with Peter.  Peter is about eighty and comes in two days a week. The younger guys wear t-shirts, Peter has a collar and tie and a long grey coat. He fiddles with the piece I have brought for him to copy, “Hm, that fits when it touches, I suppose”, he says disapprovingly. I immediately have confidence that he will make a good job for me. “But I probably won’t be able to do it till next week.”  “Fine!” I say.

The next afternoon Peter phones to say that my job is finished. It’s perfect, of course. The prototype was made of mild steel with a painted finish. I told him my part would be used in a wet environment, so he made it out of stainless steel.

I went to pay the boss. When I asked for a VAT receipt he gave me an old fashioned look. I explained that I couldn’t record it as a business expense if he didn’t.  “Ah,” he said, “You’re very naughty. I slipped it in for you and now you want the paperwork. In that case you should have issued a purchase order, then the book-keeper could deal with it properly.” He made an exception for me. What a wonderful combination of informality and bureaucracy. 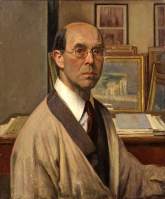 William Rothenstein (left) was principal of he Royal College of Art from 1920 to 1935. It’s hard to believe it now, but when he took over, the RCA was a pretty poor art school and its reputation was low. Rothenstein revolutionized it. He thought it was stuck in an Arts-and-Crafts time warp, and although he had little time for the modern movement (he called Cézanne’s followers “ces ânes”, these asses) he wanted to bring the college up to date by hiring top artists who would have studios there and teach part time.

The the Arts and Crafts movement was the gateway to modernism and in sculpture it influenced the move away from modelling towards direct carving, as illustrated in Tate Britain’s exhibition “Barbara Hepworth: Sculpture for a Modern World“. (Hepworth and Henry Moore were RCA students under Rothenstein.) But in design it was overtaken by more forward looking movements. Rothenstein said,”It is important we should not fall behind the Continental industries, and the freshness of design, execution and subject matter which is characteristic of the best French, German and Austrian work has not been sufficiently encouraged and sought for at the College.” The book accompanying the Hepworth exhibition has something about pottery at the RCA that I hadn’t seen before. In 1920 Rothenstein was happy to go along withe the painted pottery taught there by Billington, and he wanted to help her by bringing in Alfred and Louise Powell as instructors; by 1924 he had discovered William Staite Murray, who was making big, sculptural vessels in a totally new way. One of Rothenstein’s ideas for reform, as shown by a letter quoted in the book, was to bring together the woodwork and pottery studios. It didn’t happen, but it was a good idea. When the Bauhaus-inspired Basic Design course was developed at the Central School of Arts and Crafts after the Second World War, that sort of cross fertilization really took off. Billington’s pottery students there worked with sculptors William Turnbull  and Eduardo Paolozzi and the painter Alan Davie. Paolozzi, who had quite an influence in the pottery studio, was himself based in in the textile department.

We had good weather and a happy weekend at Art in Clay at Hatfield House. In the brief lull before returning to work, here’s a few things that caught my eye from exhibitors who stood out from the traditional potters. 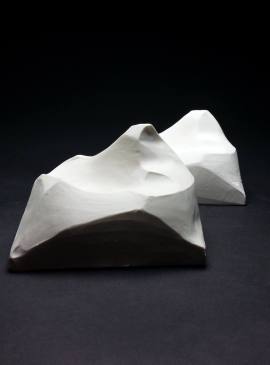 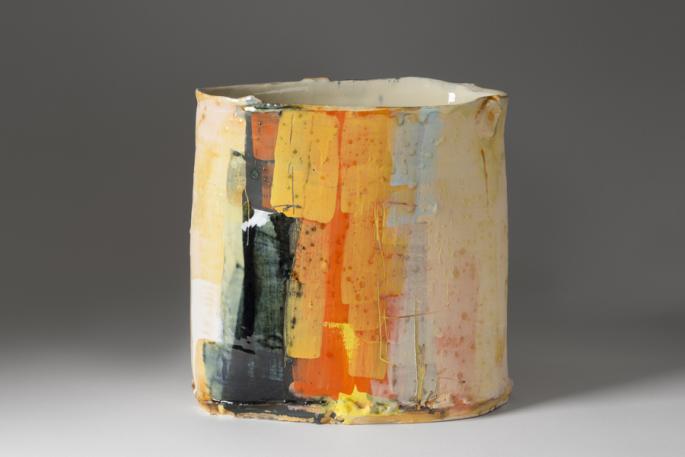 One of Vilas Silverton’s Zen rogues (left, top) was featured on the show ticket. I liked them and I liked Vilas. He breaks the rules and he’s an artist who happens to work in clay rather than a potter, sometimes like Richard Slee, whom some of his work (above) reminds me of.

Student work, unconstrained by the need to sell, is always interesting. From Cardiff, Sarah Statham did good things with tiles, with oblique, inconsequential images. Joanna Simmonds made faceted porcelain mountains (left, middle). Cardiff is one of the good ceramics departments that hasn’t been closed. There was also innovative and cheeky work by students of Central Saint Martins: the pots with boobs were disapproved of. Central St Martins trains students to be industrial designers, but those who exhibited at Art in Clay wanted to be makers.

Independent schools have the resources to set up pottery studios that state schools don’t, and Chris Sutherland, artist in residence at Bishop’s Stortford College, brought an excellent group of A-level work, much of which is of degree standard.

Barry Stedman’s ceramics become increasingly painterly with an assured use of colour (left, bottom), not always evident in ceramic art.