In my last post I said that Muriel Rose, who helped to create the post-war canon of studio pottery, omitted William Newland and Margaret Hine, two busy and successful contemporaries. I’ve written about Newland and Hine here and mentioned them in several other posts and readers will know how much I like their work; so I was delighted to see several of their pieces in a private collection, and here as a taster are a few pictures.

Above is a delightful Daniel and the Lion in terracotta by Newland, from the 1950s, robust but full of fun, typical of his work and his cheerful approach to pottery. Below are two birds by Margaret Hine, also typical of her work in this period. Hine and Newland made a contemporary interpretation of faience or tin-glazed earthenware. They had seen it on holiday in Spain in the late 1940s and in a 1950 exhibition of Picasso’s pottery. They borrowed Picasso’s decorating methods, combining painting, sgraffito and wax resist to produce varied and complex effects. In due course I will update this post with more pictures. 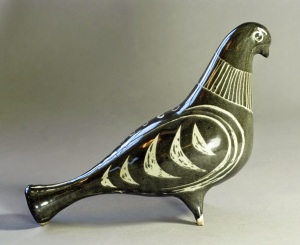 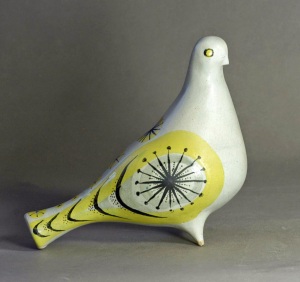 The Hine pigeons are, in fact, not faience but stoneware decorated in the manner of faience. The one on the left has a black glaze over white glaze and the drawing scratched through. The birds look as if they were made in moulds but they were actually assembled from parts thrown on the wheel, which makes them all different.

Newland taught pottery in London at the Central School of Art and Design and the Institute of Education, and Hine at High Wycombe Art School. In their later careers they worked in a variety of methods and Hine made these little stoneware bowls (left) with a lovely chün glaze at High Wycombe. If you didn’t know who made them, you might have guessed from their pigeon feet.