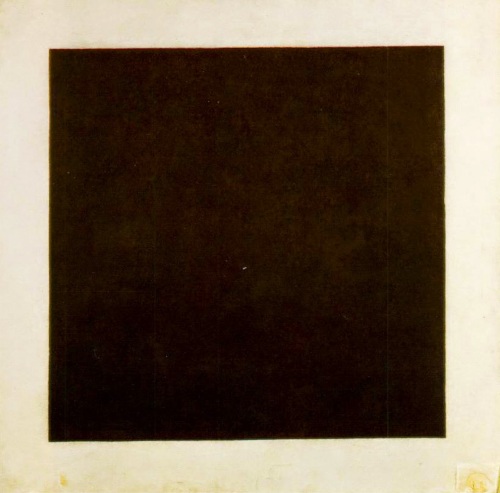 Kazimir Malevitch’s “Black Square” (1915) (above) was the end of representational painting. In 1916, the Dadaists’ Zurich exhibition was the end of art. After those momentous events, what art became was a family whose members bore some resemblance to one another, but in which distant relatives looked very different indeed.

And where did one go after the “Black Square”? In the comprehensive Malevitch exhibition, which ends at Tate Modern today, Malevitch’s career, before and after “Black Square”, is traced and documented. He put a great deal of energy into teaching in the 1920s, inspiring his students with his ideas about Suprematism, his art doctrine of which the black square became a symbol. In the 1920s, as Stalin’s power increased in Russia, avant garde art was marginalised and condemned. Malevitch himself was imprisoned, accused of being a German spy. Then, in the 1930s, he started to do representational painting again, including portraits of workers. But this was not socialist realism. There were elements of realism, Suprematism and Renaissance portraiture. To some extent this development may have been part of the Return to Order which occurred in art throughout Europe after the First World War; in part it may have been the need of a painter to continue painting, and a feeling of the limits of pure, hard-edged abstraction.

One of Malevich’s last paintings was a portrait of E.Yakolevna (below), into which a lifetime’s experience is poured. To me this was one of the most beautiful portraits in the exhibition, with traces of abstraction in the red, white and black stripes in the subject’s collar. In this period of his life, Malevitch signed his pictures with a black square. At his funeral in 1935 the front of the hearse bore a black square and mourners carried banners with black squares.