I’ve written before about the closure of the Harrow ceramics course, the BA Ceramics at the University of Westminster. Matthew Partington, of the University of the West of England, described the closure of ceramics courses a few years ago in an interesting paper “Can British ceramics education survive?”  He says that in 1980 there were 17 degree courses in Great Britain; in 2010 there were four.  The decline is actually steeper:  In 1976 there were 37 full-time courses in ceramics (not all degree courses), although ceramics is still taught on some 3D courses.

There are several reasons for the decline.  (This, I should say, is my gloss on Partington’s argument, not exactly what he writes.)

Fewer schools teach it, because of financial pressure, pressure on the timetable, concerns about health and safety and lack of skilled teachers.  It’s not necessary to do a foundation course before a student goes on to an art degree, so students can start art at university without any experience or knowledge of ceramics.

There were too many ceramics courses and it was impossible to fill the places.  They’re expensive, and if they’re not filled, they have to close in the end. Financial stringency in universities has ensured that.  Ceramics tutors were getting old and they weren’t being replaced.  One exception is Cardiff, where ceramics is still thriving.

Ceramics is unfashionable.  It’s about materials and technique and not about ideas or self-expression. As art has become more cerebral, ceramics has lagged behind, though not on post-graduate courses. Ceramics expanded in a hands-on, intuitive way and there’s little critical discourse in the ceramic community. (It’s surprising how insatiable is the appetite of the older generation of pottery enthusiasts for throwing demonstrations.) There aren’t enough role models for young artists who want more than that. They would rather do fine art, animation or film.  Ceramics once chimed in with alternative ideas; now it’s realised that it has a big environmental footprint, it’s not green any more.

The cost of a degree means that students have to think about whether it will fit them for employment. Ceramics won’t, so it’s now too expensive for everyone – for the university and for the student.

Partington points out that experimental ceramists depended on teaching for a living and weren’t under too much pressure to sell their work.  Without teaching, some won’t be able to make a living. They’re not in the same market as the makers of useful pots, and the market for ceramic art is not well developed. Although there  an over-supply of courses, there is probably an over-supply of ceramists as well. The market is lumpy: some potters cannot keep up with demand; others cannot make a living. I’ve spoken to many makers and gallery owners about this and no-one really knows why some things sell and others don’t. It’s not directly related to the quality of the work. A famous name helps, but is no guarantee. Perhaps if some ceramists have to stop making it will be better for those that continue.

But there may be a zero sum.  The unfashionability of ceramics may mean that the market for it also shrinks. Anyone who sells ceramics direct to the public knows that most of their customers are over fifty.  They grew up with Cranks and the Design Council. Will the generation that grew up with instant messaging and neo-liberalism replace them?

Kazimir Malevitch’s “Black Square” (1915) (above) was the end of representational painting. In 1916, the Dadaists’ Zurich exhibition was the end of art. After those momentous events, what art became was a family whose members bore some resemblance to one another, but in which distant relatives looked very different indeed.

And where did one go after the “Black Square”? In the comprehensive Malevitch exhibition, which ends at Tate Modern today, Malevitch’s career, before and after “Black Square”, is traced and documented. He put a great deal of energy into teaching in the 1920s, inspiring his students with his ideas about Suprematism, his art doctrine of which the black square became a symbol. In the 1920s, as Stalin’s power increased in Russia, avant garde art was marginalised and condemned. Malevitch himself was imprisoned, accused of being a German spy. Then, in the 1930s, he started to do representational painting again, including portraits of workers. But this was not socialist realism. There were elements of realism, Suprematism and Renaissance portraiture. To some extent this development may have been part of the Return to Order which occurred in art throughout Europe after the First World War; in part it may have been the need of a painter to continue painting, and a feeling of the limits of pure, hard-edged abstraction.

One of Malevich’s last paintings was a portrait of E.Yakolevna (below), into which a lifetime’s experience is poured. To me this was one of the most beautiful portraits in the exhibition, with traces of abstraction in the red, white and black stripes in the subject’s collar. In this period of his life, Malevitch signed his pictures with a black square. At his funeral in 1935 the front of the hearse bore a black square and mourners carried banners with black squares. 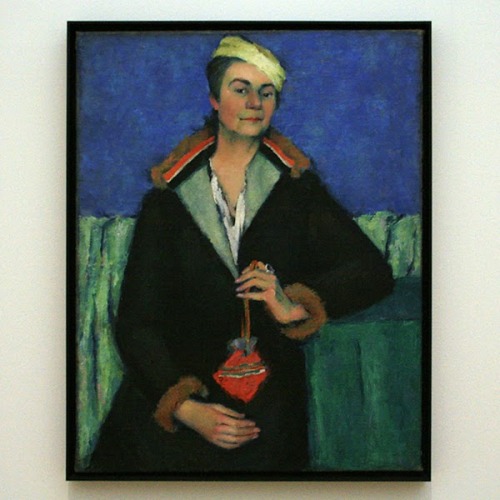 PROBLEM
To determine the weight of dry matter in the glaze slop.

Where:
W = the dry weight of matter in the slop
L = the weight in grams of a litre of the slop
G = density of the dry matter relative to water (its relative density)

Therefore G must be determined.

Weight  Wd of dry matter may be determined by measurement.

But volume  Vd of a given weight of dry matter is not known.

Therefore Vd must be determined.

Determine by displacement: take 1 litre water; add a given weight of dry matter and stir; measure displacement  Vd in litres.

As readers of this blog will have realised, I’m researching how pottery was taught in British art schools in the 20th century.  Here’s a very, very brief overview.

Practical pottery in Britain was first taught by Richard Lunn at the Royal College of Art (1901-15), then at Camberwell College of Arts and Crafts (1908-15). Alfred Powell introduced pottery painting at the Central School of Arts and Crafts in 1906. Lunn’s and Powell’s inspirations were Arts and Crafts pottery, Iznik and Italian maiolica. W.B Dalton, head of Camberwell College, was a grand feu, East-Asian stoneware inspired potter but he left teaching to Lunn. The grand feu ceramics of Dalton and Bernard Moore in Britain, Charles F Binns and Taxile Doat in the USA, and Ernest Chaplet, Auguste Delaherche and Alexandre Bigot in France – the progenitors of studio pottery – were of little interest to Lunn and Powell.

The USA was ahead of Britain. Binns taught grand feu ceramics at the New York State School of Clay-Working and Ceramics from 1900, and Doat introduced it to the Art Academy and Porcelain Works at St. Louis, in 1909. “Studio pottery” was an American term, first used in a review of Binns’s The Potter’s Craft in Keramic Studio in 1910. (If anyone can find an earlier use of the term, I would be grateful for the reference.)  Studio pottery was not taught in a British art school until William Staite Murray was appointed to the Royal College of Art in 1925.

Bernard Leach’s view of craft training was similar to that of C.R.Ashbee, who advocated workshop training and wrote Should We Stop Teaching Art? (The answer was that art schools should be converted into subsidized craft workshops.) Leach said, “The greater part of art school training does more harm than good,” and the studio pottery movement in Britain developed an anti-art bias. Leach’s apprentice system, central to his craft philosophy, was, however, problematic. Most studios were too small to support unproductive staff: apprentices were never paid much and some actually had to pay for their training. The employment of schoolboys, which was tried for a while, did not work. The apprentice system was unsustainable and so there emerged a pattern of potters getting rudimentary skills in art schools and then going into workshops. By the 1970s, Britain had almost forty full-time art school courses in ceramics.

In the 1930s the Central School had flirted with industrial training, but the students did not want to go into industry, and certainly not to Stoke-on-Trent. The Second World War changed everything. The Central had been bombed and evacuated and in 1945 pottery had to be started from scratch. Dora Billington had taken over as chief instructor with Gilbert Harding-Green as her associate. They became the leading school for art-led ceramics. In 1947 the Central had a dynamic new principal, the painter William Johnstone, who introduced modernism into the fine arts, industrial design in place of crafts, and Basic Design (a Bauhaus-type training) for all disciplines. Out of deference to Billington, who would not countenance industrial design, the pottery course remained craft-based.

The post war optimism, Johnstone’s reforming zeal, the introduction of modernism and Basic Design, and the need to rebuild the pottery department, all contributed to the ethos of Central ceramics. Picasso’s ceramics, first shown in Britain in 1950, also exerted an influence. By 1951 – Festival of Britain year – Billington had put together the team that would define the “New Look” in ceramics at the Central: Harding Green as her loyal lieutenant, Richard Bateson, a country potter with an extraordinary command of throwing, and two young potters, William Newland and Kenneth Clark, who were outside the Leach orbit. Billington’s approach to teaching was to get the student to discover what he or she wanted to do, give them the means to do it and then make them work very hard. She insisted on high standards, but she did not think there was only one standard.

Tendring district council removed this ironic Banksy graffiti from Clacton-on-Sea because of complaints over the racist slogans. That raises several questions:

Does the high regard in which Banksy is held encourage the defacement of buildings by thousands of talentless graffitists, and should he be treated simply as a vandal?  Or is creative vandalism a special case?

Is he now held in high regard because of the high money value of his works and is he part of the artistic establishment?

Is it right to respond in this way to sincerely expressed feeling of offence?  Does art justify offence? Is the outcry over the removal of this graffiti partly inspired by its money value?

I like Banksy, but let’s get him into proportion: he’s a witty political cartoonist.