Last night I went to the launch exhibition accompanying the three-day conference on Ceramics and the Expanded Field at the University of Westminster, which runs from 17-19 July.  It’s part of a major research project by the Ceramics Research Group, funded by the Arts and Humanities Research Council. The conference is subtitled: Museum as Context, Creation and Authorship, Process and Material, Audience Engagement.

My image shows an intervention by Clare Twomey, a British artist who constructs large-scale installations, sculpture and site-specific works from clay.  She has exhibited at Tate, the Victoria and Albert Museum, the Crafts Council and the Museum of Modern Art in Kyoto-Japan. An interesting aspect of her practice is her collaboration with industry, including Royal Crown Derby, Emerys minerals and Wedgwood.

This installation comprises a large bounded space in which a performer casts objects from slip (liquid clay) in plaster moulds. The objects are small kitsch figures with which the performer populates the space in a manner she chooses.  Her performance is poised and balletic.  She does not respond to questioning.  If you talk to her, the exhibition attendants ask you to stop. 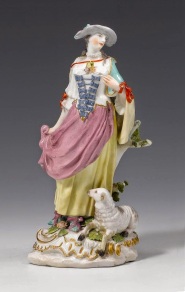 Twomey’s work, Piece by Piece, refers to the quest for perfection through iteration and the relationship between audience and exhibit. The focus on slip casting figures recalls 18th century soft-paste porcelain, in which thousands of figures were cast and which did achieve a sort of perfection. Twomey’s are relatively simple.  Although they are made in multipart moulds, they come out whole.  In the most virtuoso works of potteries like Chelsea (left), figures were so complicated that they had to be assembled from several cast parts. Twomey’s work is about the process, but the there is little finishing and the figures are fairly rough. This sort of conscious reflexivity, in which the work is about itself, is normal in academic ceramics. The unconscious Chelsea figure was not about anything.

Raising the question of art’s relation to the audience is hazardous, as the Yellowist outrage on Rothko’s Black on Maroon demonstrated.  Here, it seems, the relationship is looking.

Craft pottery went through a phase in which the work had to be designed, made, fired and sold by the maker (and if he didn’t sell it, it had to be used by the maker as well).  That was a departure from Arts and Crafts practice, in which a separation between conception and making was normal, if problematic: William Morris did not print all his wallpapers and William de Morgan did not paint all his pots.

What was problematic for Morris was that he advocated an economy in which things were made by autonomous workers, while his factory was not like that, and he said it could not be like that until after the revolution. The separation of designing from making also became problematic in Arts and Crafts practice as familiarity with materials became increasingly important .

Twomey’s work is post-craft and in it the relation between conception and execution is different from that in the Arts and Crafts Movement. In neither is the maker the artist, but here the artist doesn’t just employ the maker but, because the work of art is the maker, she employs the work of art itself.  In early craft, the maker was employed to make the object; in this post-craft work the maker is the object you are looking at. In “Piece by Piece”, the objectification and silencing of the worker reproduces the worst employment practices of capitalist society.

2 thoughts on “CLARE TWOMEY, "PIECE BY PIECE": CERAMICS ABOUT”