Tin-glaze potters normally use a lead/tin glaze, which is bright, adaptable and reasonably hard.  My usual glaze, derived from Daphne Carnegy and Alan Caiger-Smith recipes, is made from lead bisilicate frit, Cornish stone, borax frit, china clay, tin and zircon.  It can be fired successfully between 1060° and 1120° C. Its main shortcoming is a slight yellowness which affects copper oxide.  In alkaline glazes, however, copper oxide produces a delicious turquoise, as illustrated in my earlier post.

In his book British Tin-Glazed Earthenware, John Black illustrates  a plate (left, Netherlands, first quarter of the 17th century) in which part of the decoration is turquoise rather than the yellowish green one expects from copper in a lead/tin glaze, which indicates an alkaline glaze. Alan Caiger-Smith gives the following Dutch glaze recipe from the mid-eighteenth century:

To this are added:
20 lb. lead
20 lb. tin
Calcined, and oxidized ground and sieved.

Such a glaze was 28 per cent alkaline (disregarding impurities), which would certainly have produced turquoise in the presence of copper oxide.  The illustrated plate was made a hundred years earlier than the recipe but may have a similar glaze. 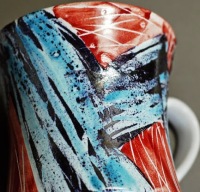 The glaze I’m developing is made from a soda/potash frit, china clay, tin and zircon and it’s also 28 per cent alkaline. As it has only four ingredients it’s quick to make up. Alkaline glazes craze like mad, so it’s not for tableware. First results are promising but the glaze was put on too thick and the firing wasn’t quite right. This piece (left) was decorated with copper, cobalt/manganese black and a red stain.