Tin-glaze potters normally use a lead/tin glaze, which is bright, adaptable and reasonably hard.  My usual glaze, derived from Daphne Carnegy and Alan Caiger-Smith recipes, is made from lead bisilicate frit, Cornish stone, borax frit, china clay, tin and zircon.  It can be fired successfully between 1060° and 1120° C. Its main shortcoming is a slight yellowness which affects copper oxide.  In alkaline glazes, however, copper oxide produces a delicious turquoise, as illustrated in my earlier post.

In his book British Tin-Glazed Earthenware, John Black illustrates  a plate (left, Netherlands, first quarter of the 17th century) in which part of the decoration is turquoise rather than the yellowish green one expects from copper in a lead/tin glaze, which indicates an alkaline glaze. Alan Caiger-Smith gives the following Dutch glaze recipe from the mid-eighteenth century:

To this are added:
20 lb. lead
20 lb. tin
Calcined, and oxidized ground and sieved.

Such a glaze was 28 per cent alkaline (disregarding impurities), which would certainly have produced turquoise in the presence of copper oxide.  The illustrated plate was made a hundred years earlier than the recipe but may have a similar glaze.

The glaze I’m developing is made from a soda/potash frit, china clay, tin and zircon and it’s also 28 per cent alkaline. As it has only four ingredients it’s quick to make up. Alkaline glazes craze like mad, so it’s not for tableware. First results are promising but the glaze was put on too thick and the firing wasn’t quite right. This piece (left) was decorated with copper, cobalt/manganese black and a red stain.

The traditional jug or pitcher, with a round belly, high shoulder and a narrow neck, is one of the most satisfying for the potter and one of the most practical.  The full belly, tapering up to the neck and down to a foot of similar width, not only looks good, but also feels good to use. The high shoulder raises the centre of gravity so that the jug is easy to lift when full, and the narrow neck acts as a funnel projecting a stream of liquid away from the lip. Making a lip that doesn’t dribble is a challenge rarely met.  I have a factory-made coffee pot with a tiny hole below the hollow spout for the drips to fall back into, a clever device that I’ve not seen repeated. The usual rule is that the lip should have a sharp edge to cut off the flow, but that’s not an absolute guarantee.

The traditional jug is one of those evolved designs, like the traditional bicycle, that it seems impossible to improve on, but aesthetics and fashion drive innovation and there are all sorts of jugs and all sorts of bicycles. Despite my praise of it, I’m not currently making this form because I’m creating a more contemporary look, but I agree with Michael Cardew, who said, “If a thrower can make pitchers well, he will be able to make any other shape. A good pitcher is the most lively and athletic of all pots, realising the conjunction of grace with strength, ready and apt for action yet majestic in repose.”

Proportion is tricky.  The eye can discern small differences in proportion, and certain ratios of height to width, and the dimensions of one part of the jug in relation to the others, are immediately satisfying.  It’s not easy to explain why, although the most useful guide is the golden ratio, in which the ratio of one dimension to another is the same as the ratio of the larger dimension to their sum, a ratio of about 1.62.  But I’ve tended to approach this sort of jug empirically, varying the proportions until they look right – in other words, my approach is subjective and personal and I work on the assumption that what looks right to me will probably look right to most other people as well.

Nevertheless, I’ve tried to analyse what looks good and what doesn’t. Here, (top), are three jugs, similar in shape but slightly different in proportion.  To my mind, the one on the left (Jug 1) looks too squat and the one of the right (Jug 3) is too narrow and its neck too tall. The the one in the middle (Jug 2) combines elegance with generosity of form. Why?

Rule 2: the length of the neck should be less than the width of the foot.

I don’t know whether there are other ratios that people find satisfying, and for the present the proportions of a good jug remain a mystery to me.
table,th,td

This is how it starts.

The demands of making pottery mean that I haven’t been able to write this blog since my note on Sicilian maiolica.With orders from galleries and exhibitions coming in the autumn I’ve been in the studio all day.  It’s a dirty job, but someone has to do it. 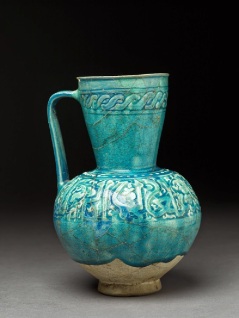 Cleaner and prettier than this heap of clay (above) fresh from the pugmill have been my experiments with a new glaze.  My existing glaze is a fairly standard maiolica, based on lead and tin oxides, derived from recipes by Daphne Carnegy and Alan Caiger-Smith. Such a glaze gives opacity, moderate hardness, sheen and a good colour response. Its only disadvantage is a slight yellow cast.  So I’ve been formulating a high alkaline glaze in order to get turquoise blue, which you can’t get with a lead glaze. Turquoise alkaline glazes were the glory of medieval Persian pottery, like this beautiful jug (left) in the Ashmolean Museum, Oxford.

Finally, after many trials (below), I found a good glaze. The trials  involved changing the way I fire my bisque.  Previously I followed the usual studio pottery practice, firing bisque to about 1000˚C and glaze to about 1060˚C. The alkaline glaze only works with bisque at 1085˚C and glaze at 995˚C. It’s cheaper than a lead glaze and uses about 10% less energy, so it’s good for the environment too. Reports and pictures soon.