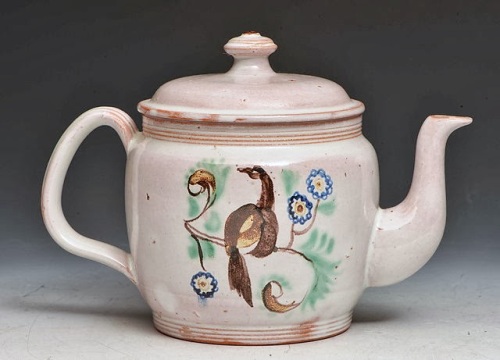 Mallams are holding an auction on Thursday, 12 December, 2013, The Design Age: International Studio Ceramics & Decorative Arts and Modern British & Continental Art, including a lot of 20th century studio pottery, some of it classic, by artists such as Bernard Leach, David Leach, Shoji Hamada, Michael Cardew, Katherine Pleydell-Bouveries, Ruth Duckworth and Lucie Rie. The illustration above is of a teapot by Rosemary Wren, whose mother Denise set up her studio in 1920 during what might be called the pre-history of studio pottery.There is also work by living potters, including  Eric James Mellon, Robin Welch,Carol McNicoll, Tekeshi Yasuda, Phil Rogers and Chris Keenan.  The expected prices of many pieces is very reasonable, much of it under £100.

From pre-history there are rare pieces by William Staite-Murray from his days at the Yeoman Pottery, which he set up during the First World War, and some by George Cox, another early pioneer. Cox was the author of an early manual on craft pottery, Pottery for Artists, Craftsmen and Teachers (1914), that anticipated the Anglo-Oriental style.  According to Paul Rice, Cox was influenced by the 1910 exhibition of Chinese art at Burlington House, which brought Sung dynasty pottery to public attention and had an immediate and profound influence on taste. Cox worked with high temperature glazes at a time when most art potters worked at low temperatures.  His approach was intuitive; he insisted that pottery was an art and refrained from giving scientific information: “To the artist craftsman, for whom chiefly this book is intended, a little scientific knowledge is a dangerous thing; for that reason no great stress is laid on formulas and analysis. Unless thoroughly understood they are a hindrance rather than an aid.”  This was a departure from earlier books for craft potters, which were thoroughly technical. 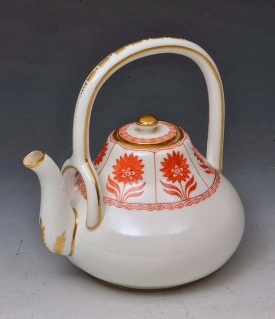 Outside the world of studio pottery, Mallams are showing ceramics by Christopher Dresser made for Mintons in the 1880s, (left) well worth looking at. Dresser took the Arts and Crafts dislike of purposeless ornamentation to the point where his designs anticipated modernism. From the 1930s there are some modernist ceramics by Keith Murray for Wedgwood, in which he eschews surface  decoration entirely.

The attraction of auctions is that I come across not only pieces like the early Cox and Staite-Murray pots but also work by artists who are entirely new to me.  In the Mallam’s catalogue I liked the little tin-glazed figures by Richard and Susan Parkinson, full of Festival of Britain whimsy, and probably for that reason expected to fetch a fairly high price.