Someone took a quick look at my vessels with flat handles (above) and said dismissively, “Colin Pearson”. Colin Pearson did make some wonderful explorations of vessels with wings – one of them is centre stage in the V&A’s ceramics galleries (below, top left) – and he won the Faenza Prize with others in 1975.  But this motif is a great deal older than Colin Pearson’s work and it’s been a theme in ceramics for not hundreds but thousands of years.

I’ve mentioned before the Deruta drug jars, c.1500, (below, top right) in the the Wallace Collection. Drug jars, or albarelli, were functional vessels used by apothecaries and alchemists but they gave potters an opportunity for decoration, calligraphy and flights of fancy like wing handles. Wing handles, I have to say, are not very practical but they’re fun and of course they offer a lovely flat surface for painting on. 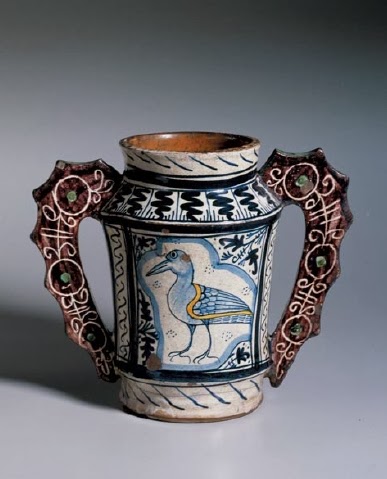 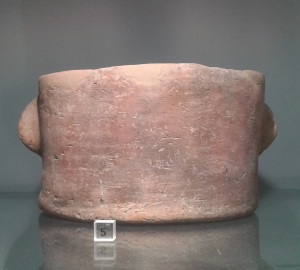 The most impressive examples of this kind of vessel are the huge jars made by Arab potters in Spain, of which the most famous is the gazelle vase (c.1375) in the Alhambra, Granada, with its iconic broken handle (above, bottom left). The odd thing is that you wouldn’t want the handle repaired. The reconstructions of it with two handles lack its ruined grandeur and look too neat. Its asymmetry plays into my preference for off-centre design. When I make pots with wing handles, the handles never match.

This pot, from Erimi in Cyprus (above, bottom right), a small deep bowl with flattened handles and some remnants of red slip,on display in the Cyprus Museum in Nicosia, is the oldest example I’ve seen. It was made between 3500 and 2800 BC, a  bit before Colin Pearson.