Nicos Anastasiades, the Cypriot president, is to open a retrospective of the work of Valentinos Charalambous, Cyprus’s leading ceramic artist, on 22 November in Limassol. It runs until 29 December. The exhibition celebrates Valentinos’s sixty-year career. (Full details at the bottom of this post.) Now aged 86, he works in his Limassol studio every day. I visited him there to talk to him about his life and work.

Valentinos came to England in 1948 to study at the Central School of Arts and Crafts, then trained with Bernard Leach and worked as a technician at the Central. He’s from a family of traditional potters. His father made unglazed, undecorated pottery in his Famagusta workshop – in the foreground of the picture below you can see one of his beautiful and wonderfully light water carriers. As Valentinos said, “When you lifted it, you wanted only the weight of water and not the weight of clay.” This traditional background recommended him to Leach, whom Valentinos refers to as “BL”. “Come down,” said BL. “You are a potter’s son, and one cannot be a potter without having the taste of clay as a young man.” 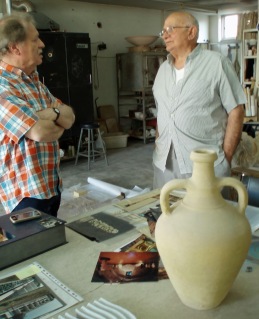 Valentinos remembers his teachers with affection and respect. At the Central, Dora Billington and Gilbert Harding-Green gave him a sound technical grounding in ceramics and of Leach he says, “You can learn the technique of pottery anywhere, but from Bernard Leach you learned a philosophy and an attitude to everything you made.”

Having been brought up in a pottery he can’t take a rosy view of the traditional potter’s life. It was hard. His father didn’t want him to do the same sort of work – in fact, he forbade him to enter the pottery. Valentinos came to London to learn decoration but soon found he couldn’t decorate without making. As he had grown up with the craft he found it easy and learned to throw well. He graduated from the Central with distinction and soon found outlets for his work, exhibiting at the Festival of Britain and the Crafts Centre of Great Britan, a major venue in the 1950s. But he had no money, had to earn a regular living and felt a responsibility to his family. And so he returned to Cyprus.

Back in Famagusta he worked alongside his father, combining his London training with an understanding of Cypriot forms and motifs. He had to set aside his ambition to make individual pots and was compelled to make commercial, decorated pieces, (below) using local clay, throwing eight hours a day. There was no tourist market so he sold to British government and military personnel. Decoration was a new departure for the pottery.

In 1955 the EOKA military campaign against British rule in Cyprus began, which also targeted Cypriots who were considered to be collaborators. His British acquaintances (who included Freya Stark and Lawrence Durrell) did him the favour of staying away from the pottery. Fortunately he had orders from Heal’s, Fortnum and Mason and Harrods; but in 1956 the Suez Crisis and difficulties in the port of Famagusta made exports impossible.

In 1957 he was offered a job teaching ceramics in at the Institute of Fine Arts in Baghdad and jumped at the opportunity. “It was a godsend,” he told me. Ian Auld, who had taken over from Valentinos as technician at the Central, had set up the ceramics department there but left after two or three years. Valentinos arrived in Baghdad in a heatwave and sandstorm and almost turned back, but he stayed for thirty years, teaching leading Iraqi ceramicists including Saad Shakir. He was happy in Baghdad and developed a love for the Arab world, feeling an affinity with the Islamic way of life. He kept up his connections in Cyprus, returning to the island for several months a year but he eventually lost his contacts in Britain. As a consequence his work is well known in Cyprus and the Middle East but less well known here.

In Baghdad he began to make murals.  His first large work was for the now-closed Nicosia International Airport (above). Commissions for Cypriot hotels and companies followed and then a commission for the Iraqi Officers Club – a large mural, 65 metres long and a difficult commission, politically sensitive and a major technical challenge. Shrinkage had to be carefully calculated. He was out 1.5% in his calculations, which doesn’t sound much, but over 65 metres that meant an error of one metre. And the client kept changing his mind about what he wanted.

Murals have been a constant theme in his work ever since. He makes what he knows he can sell but doesn’t work to commission any more because he doesn’t want details to be dictated by the client. The forms of a mural in progress in his studio include Arabic elements: the Hand of Abbas (a Shi’ite motif) and motifs drawn from the embroidery of the Marsh Arabs of southern Iraq whose free way of life he admires.

Similar rhythms occur in free standing sculptural pieces like the one at the top of this post. There he embodies elements from language, seeing an analogy between classical Greek prosody, based on the alternation of long and short vowels, and the long and short strokes of Arabic script. In recent years his interest in language and ceramics has been expressed in large dishes with lettering, as in this dish (below), about 75cm in diameter, which uses the poetry of Cavafy, inscribed in a way that is primarily decorative and which is meant to be hard to read.

Valentinos’s big studio is full of work in progress, including glaze and body tests with celadonite, a curious mineral that occurs in the Troodos mountains with a colouring oxide that looks like copper but which is in fact iron. The pressure of work and teaching means he can’t spend as much time as he would like on this research. As he doesn’t like to be disturbed when he’s working, the studio is unmarked and the door is closed if he’s not expecting visitors. He has several students, including Marina Pieridou, the person who introduced me to him. A monograph on his work, based on conversations between Valentinos and Marina, is in preparation.

Valentinos is an enchanting and generous man who puts a great depth of knowledge and breadth of experience into his work. He has had a happy life, he says, and would change nothing if he had to live it again.