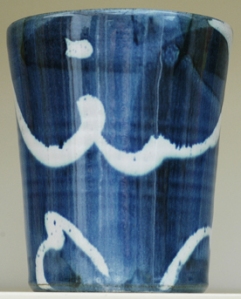 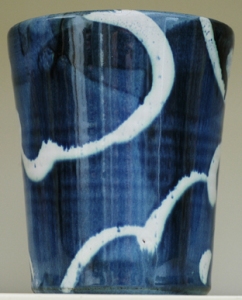 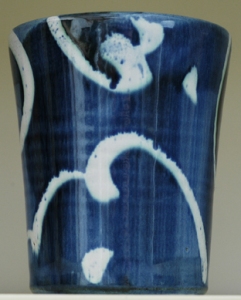 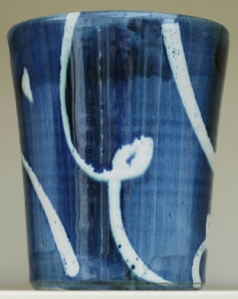 My pottery is in the maiolica tradition but I avoid maiolica clichés (birds, flowers, fruit and fishes) and try to make designs for today. The theme I’ve been exploring for some time is the arabesque – a curving line that follows the form of the pot and the shape of the brush.  Believe me, birds and flowers would be easier  because their shape is given and doesn’t have to be invented.  They also have a wider appeal.

The particular problem with decorating a cylinder is to draw a few marks that go right round the pot but which fill the space and look balanced from any angle. The design may look good from one angle but not from another, usually because it’s too empty. Then the temptation is to fill the space with tiny, busy marks, but I don’t want to do that either. I want a loose, open design in which there is harmony between foreground and background.  The size of the brush also has to be taken into account in relation to the size of the pot. It has to be not too thick and not too thin, though there are acceptable variations in the weight of line on both small and large pots.

On this pot (above) I’ve got the effect I want after much trial and error.  (The pictures show  four faces of the same pot.)  It was painted with a long,  round sable brush with a square end, which gives a slight variation in thickness as the brush turns, keeping the design lively. This couldn’t have been done with any other brush than the one I used. For many years I bought synthetic brushes to save money but now I use sable brushes for most things.  They are responsive and hold the paint until the end of the line. For washes I  also use brushes with natural hair (squirrel, ox or goat) because they have a soft edge, which suits my style more than the hard-edged synthetics.

2 thoughts on “FOUR FACES OF THE SAME POT”