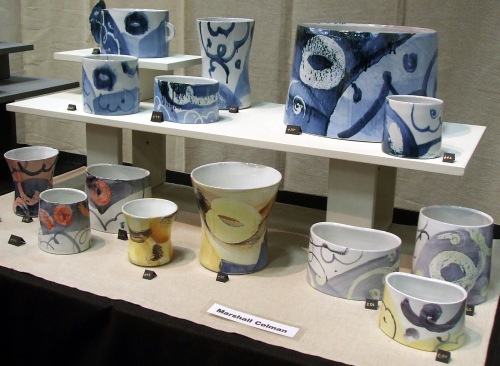 I had a good show at the Oxford Ceramics Fair last weekend. Organised by the Craft Potters Association, it selects sixty of the best potters in the UK and attracts a discerning and interested clientele. It’s held at St Edwards School in a large, well-lit hall. My work was well received and sales were good. One of my customers, a senior academic, made a careful and precise assessment and declared that my work was the third best in the exhibition.

As an earthenware potter with a love of colour, my favourites in show were Irina Sibrijns, Patia Davis, Nigel Lambert, Richard Phethean, Jenny Southam, Craig Underhill and Richard Wilson.

Oxford Ceramics is a juried exhibition and never shows anything second rate, but some of the potters were not showing anything new. Much studio pottery is conservative and one experienced exhibitor, who was showing new designs, said that some had been making the same thing for thirty years. After that time you get good at it and you refine your product – a slight re-shaping of the lip here, a slight modification of the glaze there, and so on. Sticking to the same thing works because pottery enthusiasts are more conservative than potters.  Specialist shows, as opposed to general craft shows, attract a knowledgeable public who collect pottery by their favourite makers.  They are not looking for anything surprising or new.  On the other hand, those potters I mentioned above are all developing new things.

Conservatism in studio pottery is associated with materials and methods – generally speaking, stoneware or porcelain fired to high temperatures in flame burning kilns. This style was introduced to Britain eighty years ago.  Although the membership of the Craft Potters Association is diverse, and is becoming more diverse, three quarters of potters still use drab colours. Earthenware potters are a minority, about ten per cent. Tin-glaze potters are an even smaller minority, only one per cent. The dominant style is still rough, hard and brown.

Many craft galleries are conservative as well, following rather than leading taste. More than one has told me it likes my work but it’s too contemporary. My ceramics sells best to people who don’t know much about ceramics, who buy things because they like them, who don’t care about materials and methods and don’t buy things because they remind them of other things. And so over the next year I hope to place more of my work in stores selling contemporary design as well as those selling crafts. 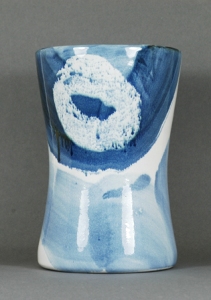 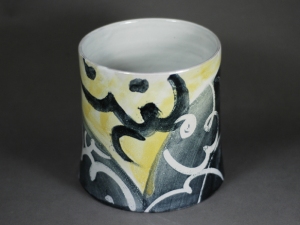 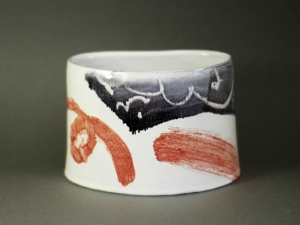 I tend to simpler and simpler colour schemes – you’ll notice how many pieces are decorated only in blue – and I create interest by contrasting shapes or  areas of light and dark on the painted surface. To achieve my effects and to add texture, I use wax resist and sgraffito. I like the way the oxides bead over the wax and then run in the firing.  The correct brush is essential if the arabesques (left) are to work.  There has to be some contrast between thick and thin strokes, but not too much.  For these lines, I use a long, round ox-hair brush with a square end.

I know this sounds terribly formalist, but the truth is, there aren’t any big ideas behind my work and it’s not even inspired by nature. I’m simply trying to solve the aesthetic and technical problems that arise while I’m making things. I got into trouble for this when I was a student and concluded that I was too happy to be an artist.

Anyway, if you can get to Oxford, I hope you like my work.

Vladimir Umanets, the anti-artist who defaced Rothko’s Black on Maroon in Tate Modern (above), has been arrested in Worthing, that most provincial of seaside towns. His action, damaging the art of a giant, caused outrage, proving, perhaps, that Modernism rules.

Umanets wrote on the Rothko painting

Umanets is no ordinary vandal, he’s an art vandal. He practices something called Yellowism and he talks the same art bollocks as every other contemporary artist:

“Imagine that yellowism is the only context which exists and you don’t need to distinguish anymore. No art, no ordinary reality (no “aRteality” as well), just yellowism, the whole universe is like one huge yellowistic chamber, all and everything is flattened to yellow. What would you say in a such ontological situation? Will you say: “Oh my god!”?”

Umanets was quickly condemned. Chris Deacon, director of Tate Modern, said he was a person of the past. Yellowism was sniffily described as obscure. But many people will be asking, “How does this differ from any other intervention in contemporary art?”

Before his Tate Modern vandalism, Umanets would have been on all fours with the Turner Prize shortlist. Below is one of his recent interventions with fellow yellow Marcin Łodyga.

Umanets told the BBC, “I’m not a vandal. I haven’t done criminal damage (below). Art allows us to take what someone’s done and put a new message on it. There will never be another Rothko in the world ever. I would like to show such a wonderful piece in the context of yellowism.” Artists are under such pressure to be original and outrageous that they have been driven to stealing other artists’ work and shitting in public. Signing your name on a Rothko seems mild in comparison.

To everyone who asks in exasperation, “What makes it art?” the answer is simple: art is just a word and if the artist, the curator and the critic agree that something is art, it’s art. In this case, the artist said that it wasn’t art; critic and curator agreed, so it wasn’t.

Umanets crossed the line from art and outrage into property:Black on Maroon belongs to Tate and is worth tens of millions of pounds. The greater the value of the property, the greater the outrage. (Banksy is the opposite of Umanets: his graffiti is worth more than the buildings he puts it on.)

Rothko – Rothko the artist, Rothko the angry, depressed, difficult man – would have also have been outraged at this stupid act but he may not have been at one with the galleristas and the critics. Black on Maroon was one of the paintings commissioned for the restaurant of the Seagram Building, a corporate HQ. Rothko hoped they would “ruin the appetite of every son-of-a-bitch who ever eats in that room.” Eventually he decided that the restaurant was too pretentious and withdrew from the commission.

I’m not saying that Umanets is a serious artist, but he’s as serious as many other postmodern artists (or anti-artists, it doesn’t make much difference). If the culture of contemporary art encourages originality and outrage, curators can’t be surprised if they are sometimes on the receiving end of the outrage. 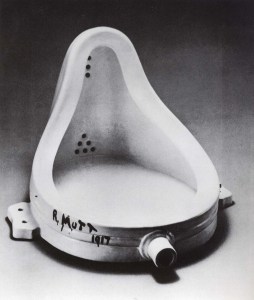 Umanets’s vandalism quickly drew an uncomfortable parallel with Duchamp’s Fountain (1917) (above), a found object, a urinal, that Duchamp signed “R.Mutt” and called a “ready-made”. BBC arts correspondent Will Gompertz said that Fountain was merely a urinal, but a Rothko was a Rothko.

Duchamp the Dadaist himself anticipated Umanets: “At another time, wanting to express the basic antinomy between art and ‘ready-mades’ I imagined a reciprocal ready-made: use a Rembrandt as an ironing board!”

I recall an event in the Paris May Days of ’68 (though I haven’t been able to find it documented – please let me know if you have) when students occupying the Ecole des Beaux Arts, faced with a police raid, went out holding not shields but the priceless old masters hanging on the school walls, a reciprocal ready-made and a statement about art and private property.

Hans Richter, another Dadaist, commented on Duchamp’s work, “The counterpart of Duchamp’s non-art is amorality, emptying life as well as art of all its spiritual content. Here Duchamp took a logical, and therefore necessary, step which was also a fatal one. He reverses the signposts of value so that they all point into the void.” That’s pretty well where we are.

Postscript Umanets was jailed for two years. After serving his sentence he apologised for what he’d done. 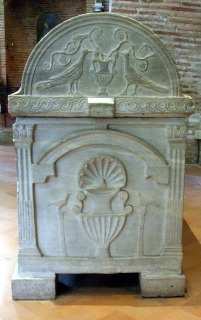 In my post about the urn motif in 19th century funerary art, I traced its origin to the late 18th century and said it was probably copied by rustic stonemasons from grand houses. That may be its origin in England, but the motif has been associated with tombs for a lot longer than that – in fact for over a thousand years.

In the Basilica of St Apollinaire in Classe, if you can turn your gaze away from the stupendous mosaics for a moment, you will see sarcophagi from the 5th to 8th centuries containing remains of the Bishops of Ravenna. Urns are depicted on three of them, like the one on the left. On the upper panel are two peacocks flanking an urn, out of which a vine grows, in the lower panel, two small birds flanking an urn topped with a shell.

The iconography of peacocks, urns and vines was common in early Byzantine art. In the Archepiscopal Museum in Ravenna, there is sarcophagus with a similar peacock-and-urn decoration. The motif is found on floor mosaics as well, as in the 6th-century mosaic pavement of Chersonesos (below). In some images a fountain flows from the urn.  A 4th century mosaic pavement In the Episcopal Basilica of Stobi (bottom) shows peacocks, deer and quails arranged around fountains spouting from urns. Some of the mosaics in Ravenna show doves around a basin of water.

The peacock, like the dove, is one of the earliest Christian symbols, found in the art of the Roman catacombs. It represented immortality and resurrection, an idea Christians took from pagans, who thought the flesh of the peacock would never decay. In The City of God, St Augustine reported his experiment on a peacock carcase: “I ordered it to be kept, and when it had been kept as many days as make any other flesh stinking, it was produced and set before me, and emitted no offensive smell.”

The symbols of the peacock, dove, urn, vine and fountain were a gift to artists, who made them into beautiful patterns in mosaic and wall paintings. In Ravenna, in the Mausoleum of Galla Placidia, a motif of of doves drinking from a basin (top), has been designed and executed with superlative skill. The artist has arranged the birds so that one is drinking, the other looking away, making a dynamic and lively figure. He also put a band of red on the white basin to echo the red feet of the doves, knitting elements of the motif together. Everything is done in a free, lively and engaging way – and this is merely a motif at the bottom of a large panel. Just for fun, artists depicted birds that may have had no particular significance, like a quail and parrot round an urn of grapes in the catacomb of St. Sebastian (above).

But what about the urn? What did it stand for? It seems to have been just a container for other symbols – the vine which represented Christ or the fountain, which represented life. Its symmetrical form, accentuated by the handles, lends itself to pleasing arrangements on sarcophagi, in niches or on pavements.

As a footnote, I mention C.H.Reilley‘s neo-Byzantine church, St. Barnabas, Dalston (1909), which I visited for a concert last week.  It’s a peculiar building made in the form of a basilica but completely plain inside, not even plastered. Its bare brick made me think of St. Apollinaire in Classe. The dome over the altar (left) cried out for decoration.  Obviously, the church couldn’t afford to have it covered in mosaic, but, despite our technical superiority over the artists of the 6th century, I doubt if we could find an artist capable of it today.

Watch out for my upcoming post about Vasemania in 18th century design and how it led on to the gloomy urns in Victorian cemeteries.