These illustrations come from a lavish album produced by the Artist Partners agency in about 1959. Their designers did some famous work, including Reg Mount’s poster for The Ladykillers, Saul Bass’s poster for Hitchcock’s Vertigo,  Brian Saunders’ poster for Oh! What a Lovely War, John Holmes’s cover for The Female Eunuch and Patrick Tilley’s poster DRINKA PINTA MILKA DAY.

Below left is a drawing by Tilley for a Bulmer’s cider advert and below right an editorial illustration by Brice Petty. 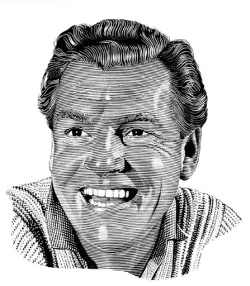 The album is representative of 1950s graphic design. The press then depended as much on illustration as photography, partly because line reproduced better than half tone in newsprint. Artists who could do accurate line renderings of photographs – for example, R.M.Hutchings’ drawing of Kenneth Moore (left) in the now forgotten medium of scraper board – were not short of work, but neither were imaginative artists like Tom Eckersley.

Eckersley had a long career as a graphic designer and taught at the London College of Communication for many years. His Guinness poster (below) was part of a long-running series. The adverts were as well-known as the product and, like all successful campaigns, began to refer to themselves.  The sea lion with the glass of Guinness was established before agency and artist made this knowing image. 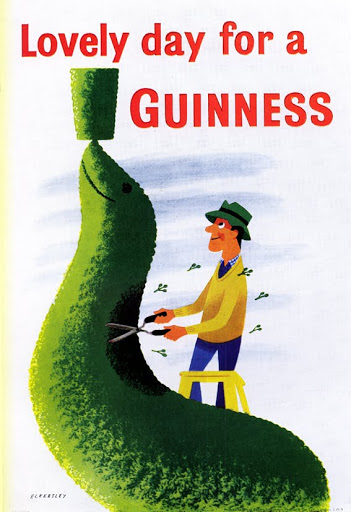 Even when the work in the album is not artistically interesting, it still captures the spirit of the age, as in this deliciously stylish photo by E.Ward Hunt for Associated Television.

Artist Partners was founded in 1951 and is still  representing artists.