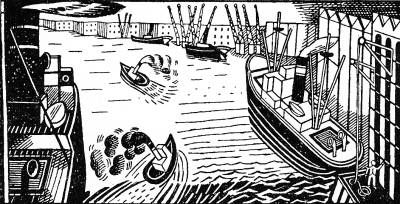 Edward Bawden (1903-1989) was a witty observer of contemporary life and his designs are a charming record of mid-twentieth century England. He was successful and arguably one of the greatest British graphic artists of the 20th century. He was also a war artist and did some serious graphic work in France and the Middle East.

Bawden’s work appeals to me for two reasons. First, because decorating ceramic surfaces requires a similar use of line and colour. Second, I was trained to do graphic work like his. At school, our Slade-trained teacher showed us how to do poster design using bold outline, flat colour, simple shapes, counterchange and hand-drawn lettering. We may well have been shown specimens of Bawden’s work. Every graphic designer had to be able to do hand-drawn lettering then and we spent hours learning the dimensions of the Gill Sans font.

Bawden was a CBE, a Royal Academician, a trustee of the Tate Gallery and received many other honours. He achieved success and recognition through the quality of his work, and presumably because of his dedication, but he did not push himself. He was famously shy. It is hard to imagine a shy artist achieving such success today.

He was prolific and it is not hard to find books, magazines, posters and ephemera with his designs. His work remains popular and he is held in great affection. Some of his images are available on the internet. He bequeathed his work to the Cecil Higgins Gallery in Bedford, who occasionally put on exhibtions.

Bawden was a master of technique. In her obituary in The Independent, Frances Spalding said, “He recognised no distinction between the artist and the designer. His interest in craftsmanship placed him in a tradition that looks back to the Arts and Crafts Movement.” Digital design has made nearly all of Bawden’s methods antique. There are still good illustrators but it’s possible to get by as a graphic designer now without being able to draw at all; a graphic designer recently admitted to me that she couldn’t make original images and relied on what she could download from online libraries.

Bawden had a small circle of friends and didn’t relish public engagements. Frances Spalding relates that, late in life, when he was quite deaf, Bawden was persuaded to go to a dinner held by Tarmac, whom he had done some work for. One of the directors talked to him at length about Tarmac’s charitable work while Bawden doggedly ate his dinner. His interlocutor spoke louder and louder and finally asked Bawden what charities he thought Tarmac should be supporting. “Road accidents?” said Bawden.

Peyton Skipworth, who promoted his work, recalls that Bawden had a curious love of money coupled with a strong disdain for it. When Skipworth put some of Bawden’s drawings on sale, Bawden pretended to be horrified at the price asked, but became content when Skipworth suggested he cross the road and look at the price of shoes. “With typical perversity, from then on he insisted that I always checked the price of shoes before pricing his own work.”

Bawden was educated at the Cambridge School of Art and the Royal College of Art, where went on a scholarship in lettering and calligraphy. One of his teachers was Paul Nash, from whom he learned the use of the starved brush, dipped in dryish paint and dragged across the paper to leave streaks of white showing under the colour. This technique was used to even better effect by Bawden’s friend and contemporary at the RCA, Eric Ravilious.

Bawden’s great strength was his ability to design for print. He made many lithographs and linocuts, typically printed in four or five flat colours, which transferred well to the commercial press. While still a student, he was taken up by Harold Curwen of the Curwen Press and asked to design a booklet for Carter Stabler and Adams of the Poole Pottery. Bawden spent a year working at the Curwen Press and acquired a knowledge of reproduction methods. Curwen changed his stolid family firm into one of the artistically most important and technically most advanced presses of the 20th century. Bawden’s work was part of the artistic transformation. 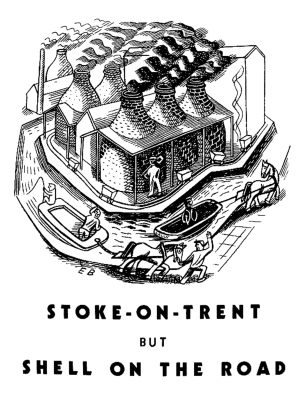 Bawden was not well known until 1928, when he was asked to do the drawings for a series of press adverts for Shell-Mex and BP (above). These now famous ads had witty captions and witty drawings. Bawden said that in the 1920s, “amusing” was a widespread term of approval. Press illustration until that time tended to be either literal or comic and Bawden’s approach to the Shell ads drawing was considered “modern”.

He went on to work for Midland Bank, Twinings, Fortnum and Mason, London Transport, the Folio Society and the Saffron Walden Labour Party. His pictures for Midland Bank were amusing. The little picture at the head of this post, done for Midland Bank, recalls Alfred Wallis, the naïve Cornish painter.

His illustrations to the Folio Gulliver’s Travels (1965) were lithographs printed in flat red, blue, grey, black and yellow inks, not in half-tone. By changing the dominant colour in each picture (as in the two below) and the way in which one colour is printed over another, which yields another colour, Bawden achieves greater richness and variety than you would think possible with five inks. This method now more expensive than full colour printing.

(All the Gulliver pictures are reproduced here .)

His design for Fortnum and Mason (above) uses black, grey and red. The line drawing has the quality of woodcut and the tones are varied by Bawden’s use of solid washes, sponging and shading with parallel lines.

His monochrome drawing of the penguin pool at London Zoo done in the1930s (below) is treated sparely, with little black, and captures the brilliant white of Lubetkin’s design. Bawden’s work may not have developed much, but he had a wide repertoire of styles and methods.

He illustrated several cookery books by Ambrose Heath (who is now a very old-fashioned cookery writer). The title page of Good Soups (below) demonstrates Bawden’s skill at varying line weight and depth of black, his ability to suggest colour through the counterchange in the roundels in the margin (black-on-white on the left, white-on-black on the right) and his educated hand lettering. The bird stealing the pea is typical. 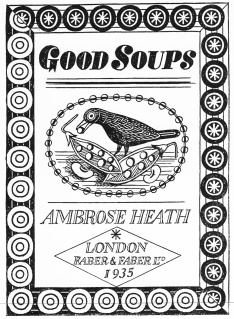 The page illustrations to Heath’s Good Food were line drawings, including these vignettes for the cook’s calendar. 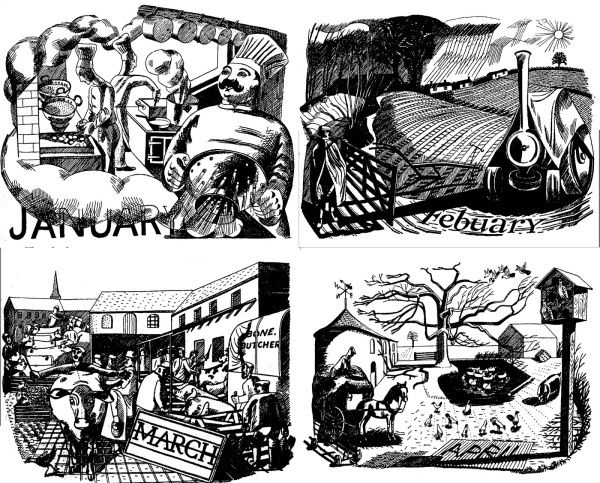