An artist friend says that the sources for Le Déjeuner sur l’herbe (above)are far more likely to have been Giorgione’s Concert Champêtre and The Tempest than Raphael’s Judgement of Paris.  The Musée D’Orsay says, “Manet was paying tribute to Europe’s artistic heritage, borrowing his subject from the Concert Champêtre – a painting by Titian attributed at the time to Giorgione  – and taking his inspiration for the composition of the central group from the Marcantonio Raimondi engraving after Raphael’s Judgement of Paris“.

This raises the interesting question, “How do we know what an artist’s sources are?”  Often an opinion becomes fixed and is then repeated as fact.  The more it is repeated, the more authoritative it becomes.  But what did Manet say?  Paul Hayes Tucker says that there is a lot we don’t know about Le Déjeuner.  We don’t know who all the models were or how Manet “had the ideas of posing one of theme stark naked and the others in their own worlds, seemingly oblivious to everything around them.  We don’t know how many preparatory works he may have done for the picture, what other works of art from his own hand or by others he may specifically have been thinking about as the picture evolved, or what relation he wanted to establish between this picture and others he planned to exhibit with it.” (Manet’s Déjeuner sur l’herbe, Cambridge UP, 1998) 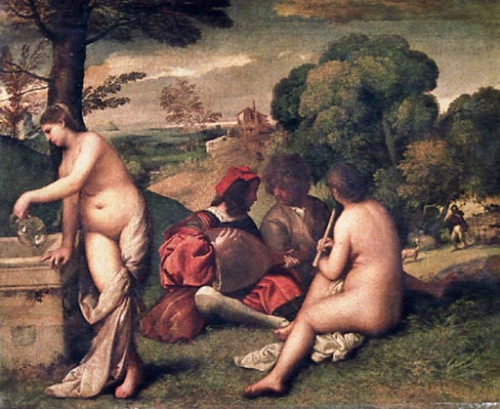 In fact we do know what works of art Manet was thinking about at the time because he told his friend Antonin Proust that he had been copying the Concert Champêtre: “When we were in [Coutoure’s] studio, I copied Giorgione’s women, the women with the musicians. It’s a really dark picture in which the ground has come through.  I want to make a new version, with a transparent atmosphere, with figure like those you can see over there.  They’ll tear me apart,  They’ll say I’m being influenced by the Italians after being influenced by the Spanish masters.” (Manet by Himself, ed. Juliet Wilson-Bareau, Little Brown & Company, 2000).  The composition of Le Déjeuner is so similar to the Raimondi that it was suggested as a source as early as 1864, a year after he exhibited  it. (French 19th Century Painting and Literature, Ulrich Finke, University of Manchester Press, 1972) Sources are sometimes based on speculation, but there can be no doubt about them in this case.

I was familiar with reproductions of Manet’s Déjeuner sur l’herbe (above) long before I saw it in the Musée d’Orsay but however blasé I was the impact of its size (more than two metres by three) and the juxtaposition of the naked woman with the clothed men was great. 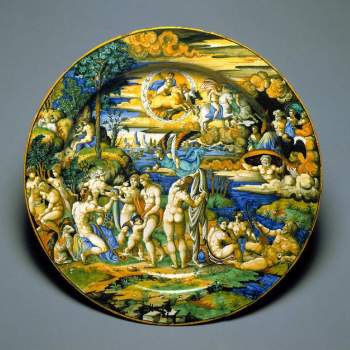 In the Fitzwilliam Museum in Cambridge, which has one of the best collections of tin glazed pottery in Europe, I saw a fine maiolica dish (left) from the workshop of Guido Durantino (16th century) showing The Judgement of Paris. There, on the bottom right, was Déjeuner sur l’herbe though not so shocking as Manet because everyone is naked. 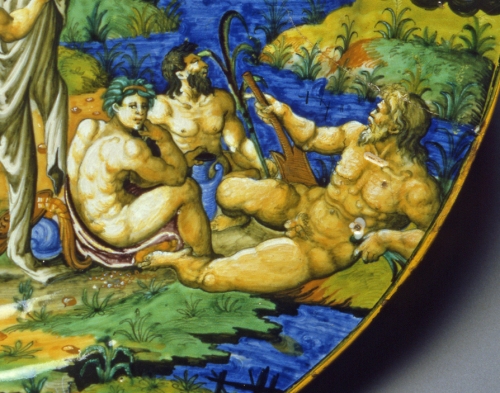 What’s the connection between Manet and a maiolica dish?  Durantino copied a famous engraving by by Marcantonio Raimondi (below) from a design by Raphael. Manet studied the old masters and copied the three principal figures in Déjeuner from Raphael’s design.